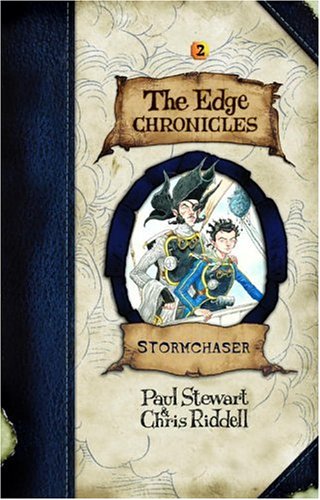 Since his childhood in the DeepWoods, young Twig has always longed to soar above the forest canopy and explore the sky. Now a crew member on his father’s sky pirate ship, the Stormchaser, his dream seems fulfilled. But a much higher destiny awaits Twig. The lofty city of Sanctaphrax—built on a giant rock, floating high in the sky—is at the point of disaster. The city’s future is dependent on stormphrax—a valuable substance available only from the heart of a Great Storm. And only the Stormchaser, with Twig onboard, could risk entering a storm. . . .
2 Votes

The Stormchasers' crew needs to find a way to pay back the money that they owe. On their next visit to Mother Horsefeather, who they owe money to, they get a chance to pay off the debt. She offers them a way to pay off their debt, and have their ship repaired. But, the job they have is very dangerous. They have to go searching for stormphrax, a rock that is extremely heavy. Stormphrax can only be made during a huge storm. A lightning bolt makes stormphrax.

What's this?
Stormchaser review by JP

The book, Stormchaser, is the sequel to Beyond the Deepwoods. The story continues with Twig and his father, Cloud Wolf, sailing into Undertown, the only real city in the Edge. It lies in the shadow of Sanctaphrax, the academic town on top of a giant floating rock. To keep Sanctaphrax from floating away, it needs stormphrax, a heavy substance created by lightning. An evil scholar once made a substance that can turn any water clean from crushing stormphrax, but no one has ever been able to make more.