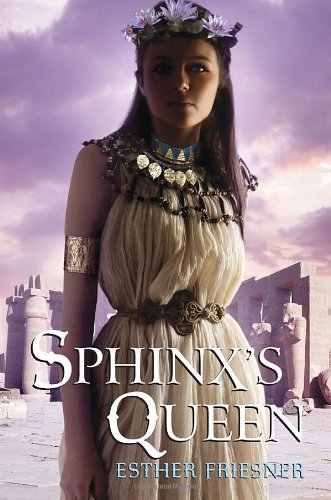 Sphinx's Queen
Esther Friesner
Ancient Egypt springs to life in this enthralling sequel to Sphinx’s Princess. As she did in Nobody’s Princess and Nobody’s Prize, author Esther Friesner offers readers a fresh look at an iconic figure, blending historical fiction and mythology in a heady concoction.Hunted . . . Overnight, every aspect of Nefertiti’s life has changed. She is no longer living at the royal palace as the intended bride of the crown prince. Instead, she is being chased by the prince and his soldiers for a crime she did not commit.Hidden . . . Traveling with two of her dearest friends, including the crown prince’s brother, who helped her escape, Nefertiti takes shelter in the wild hills along the Nile’s west bank. She must rely on her own resourcefulness and skills (all those secret archery lessons prove very useful) as the fugitives fight to survive.Haunted . . . But the need for justice gnaws at Nefertiti. She is determined to plead her case to the Pharaoh and set things right. As she begins to question long-held sacred beliefs—a questioning that could alter the fabric of Egyptian society—her extraordinary journey from commoner to royalty brings adventure, intrigue, and romance.
1 Vote

Sphinx's Queen picks up where Sphinx's Princess left our trio of Nefertiti, Nava, and Prince Amenophis. After escaping from Thebes in the last book we pick up with the first sunrise of their quest for freedom. Together they make their way to Dendera but about half way the odds turn against them. With luck our protagonists make it to Dendera although they are no sooner sent to Thebes. Now is the time for justice to rein as Nefertiti is judged by Maat, an Egyptian goddess. If the verdict of innocence is given will she be able to be with Amenophis or will they be separated forever?