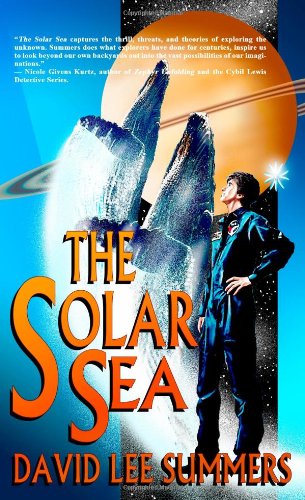 The Solar Sea
David Lee Summers
Humans settled the Moon and satellites orbiting the Earth were a common sight, but with the abolition of NASA, humans had no desire to go further and space exploration died. Then, a technician from the Very Large Array, a radio telescope in New Mexico, discovers powerful particles orbiting Saturn’s moon, Titan, which could be a new energy source. Strangely enough, following the discovery’s announcement, whales around the Earth changed their songs overnight. As scion of the powerful Quinn Corporation, Thomas Quinn builds a solar sail—a vessel pushed by sunlight itself—to find the source of these particles in Titan’s orbit. He gathers the best and brightest team to pilot his craft: Jonathan Jefferson, an aging astronaut known as the last man on Mars; Natalie Freeman, a distinguished Navy captain; Myra Lee, a biologist, specializing in whale communication; and John O’Connell, the technician who first discovered the particles. All together they make a grand tour of the solar system and discover not only wonders but dangers beyond their imagination. Drawing on his experience as an astronomer, David Lee Summers has created a story that is both exciting and plausible, one that can be enjoyed by both the young and young-at-heart who enjoy looking at the planets on a clear night and dreaming of what could be.
1 Vote

In the not so apparently distant future, NASA has been disbanded and the farthest the human race will ever get is Mars. Thomas Quinn has a dream that one day he will build a ship that is propelled by solar energy and that he will explore our solar system with it. At the Very Large Array in New Mexico, John O'Connell discovers a particle on Titan, one of the moons of Saturn, that could potentially allow time travel or be used as a fuel source. In another part of the world, marine biologist Myra Lee finds that the whales have all started singing a new song.