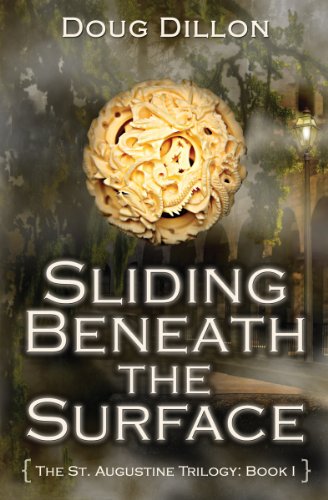 Sliding Beneath the Surface:St. Augustine Trilogy,Book I
Doug Dillon
In America’s oldest and most haunted city, St. Augustine, Florida, teenager Jeff Golden is in trouble. Horrible dreams won’t let him sleep, and he is up to his eyeballs in terrifying, paranormal experiences.Finally, Jeff turns to his girlfriend Carla, and Lobo, the mysterious Native American shaman, for help. But what he discovers is a lot more than he bargained for.A ghostly presence linked to a local historic cemetery is not only threatening Jeff’s sanity but his life as well. And before he knows what’s happening, Jeff finds both himself and Carla pulled into one of the nastiest and most bloody events in Florida history. It is a place from which they may never escape.
4 Votes

Do you believe in spirits? When Jeff finds himself having Paranormal experiences of being pulled into somewhere that isn't home, seeing himself double, and lots of coincidences involving the number 28 he turns to his best friend Carla.

In America's oldest and most haunted city, St. Augustine, Florida, Jeff Golden is in big trouble. He's having horrible dreams that won't let him sleep. He is up to his eyeballs in horrifying, paranormal experiences. Jeff turns to his girlfriend, Carla, and the mysterious Native American shaman, Cobo. But what he discovers is a lot more than he bargained for. A ghostly presence linked to a nearby historic cemetery isn't only threatening Jeff, but his life too.

Jeff Golden, who is a normal teenager, finds himself moving to St. Augustine, Florida with his mom. After arriving to his new home, he starts encountering paranormal experiences like waking up and finding a bayonet in his bed. Desperate for help, he turns to his attractive and trustworthy girlfriend, Carla. She introduces him to her neighbor, Lobo, an old Native American wood carver. He reveals to Jeff what has been occurring and how to prevent the paranormal happenings.