Orion Poe and the Lost Explorer 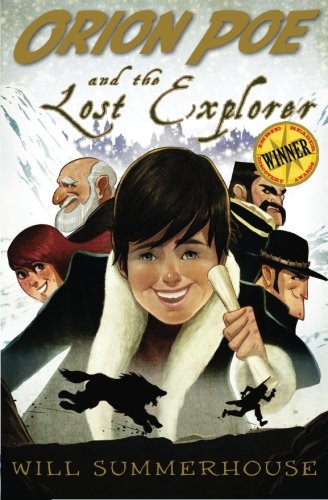 Orion Poe and the Lost Explorer
William Summerhouse
Eleven-year-old Orion lives with his stodgy grandfather in eastern Maine, where nothing exciting ever happens. But then a series of strange events draws him into the mystery of a lost explorer, and Orion is swept up in a whirlwind of adventure that takes him to the top of the world. To survive he must outwit a scheming treasure hunter, team up with a gang of flimps, and take on a tyrant with an anger management problem. Can Orion solve the mystery and get back home alive? And just what are flimps, anyway? Orion Poe is about to find out. Join him as he laughs, cries, bluffs, and shoots his way to the heart of one of the greatest mysteries in the history of exploration. Along the way he discovers that the world is far bigger—and stranger—than he ever imagined.
4 Votes

Tweet
Orion Poe and the Lost Explorer review by cbill6

In the state of Maine, a kid named Orion Poe is given the opportunity to search for treasure. When his ship runs into an iceberg, he and his friends must continue on foot through harsh weather conditions.

What's this?
Orion Poe and the Lost Explorer review by dancechicka

Orion Poe has a pretty boring life in eastern Maine—helping his cantankerous old grandpa, exploring the forest next to his cabin, and playing on the banks of the ocean, wishing something exciting would happen.  Incidentally, the ocean is where his life is turned upside down after a small ship crashes into the cove near his house, bringing a mysterious Mr.

What's this?
Orion Poe and the Lost Explorer review by sschu5

sschu5
This book is about a boy named Orion who meets a stranger under a ship that was wrecked. The stranger gives Orion a knapsack that holds a dispatch box with a map. To find out the meaning of the map, he brings it to a friend of his grandpa's named Professor Meriwether. Together they head out on an expedition to see where the map leads. This expedition takes them to the top of the world. They end up finding themselves in a colony and accused of murder! Orion is the only one who is not in prison. Can he help his friends escape and still survive?
Rating:
4
Content Rating:

What's this?
Orion Poe and the Lost Explorer review by moseso

Orion Poe and the Lost Explorer is an action-filled book. The main character, eleven-year-old Orion, is living the adventure of a lifetime. After a strange turn of events, he finds himself swept up into a cyclone of exploration and unforeseen dangers. He sails to find the Lost Explorer, who mysteriously disappeared. Once on shore, the crew is plagued with monstrous things that kill several men. Will Orion make it home? Or become stuck in this barbarous land forever?

Orion Poe and the Lost Explorer has also been nominated for Best Middle Grade Novel of 2014 by Kid Lit Reviews.