The Lens and the Looker 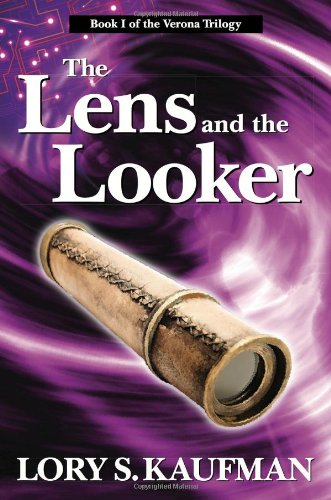 The Lens and the Looker
Lory S. Kaufman
Book #1 of The Verona Trilogy: Young Adult, Post-Dystopian Fiction        It's the 24th century and humans, with the help of artificial intelligences (A.I.s), have finally created the perfect post-dystopian society. To make equally perfect citizens for this world, the elders have created History Camps, full sized recreations of cities from Earth's distant pasts.   Here teens live the way their ancestors did, doing the same dirty jobs and experiencing the same degradations. History Camps teach youths not to repeat the mistakes that almost caused the planet to die. But not everything goes to plan.      In this first of a trilogy, we meet three spoiled teens in the year 2347. Hansum almost 17, is good looking and athletic. Shamira, 15, is sassy, independent and an artistic genius. Lincoln, 14, is the smart-aleck. But you don't have to scratch too far beneath the surface to find his insecurities.    These three "hard cases" refuse the valuable lessons History Camps teach. But when they are kidnapped and taken back in time to 1347 Verona, Italy, they only have two choices; adapt to the harsh medieval ways or die. The dangers are many, their enemies are powerful, and safety is a long way away. It's hardly the ideal environment to fall in love - but that's exactly what happens.      In an attempt to survive, the trio risks introducing technology from the future. It could save them - or it could change history.      Series Overview:  The Lens and the Looker is the first book of The Verona Trilogy. It's followed by The Bronze and the Brimstone and The Loved and the Lost.      The series takes readers along on the life-changing journey of three 24th century teens. While the three protagonists appear quite immature in the first half of The Lens and the Looker, this is not a series aimed exclusively at young teens.      Lory Kaufman says he writes for readers 13 to 113, (and precocious 12-year-olds) This is borne out by the fact that about half the readership of the series is adult.      What many readers say they love about this series is its wonderful mix of science fiction (the future) and historical fiction (the past). While there's time travel, there are also sword fights, and while there are detailed descriptions of ancient technologies, the story also includes many colorful characters who just happen to be artificial intelligences. There's allusions to a Romeo and Juliet love story and also characters who have murderous intentions toward the lovers. And the setting? Many readers are praising the accurately described historical setting of 14th century Verona Italy, where much of the story takes place.
1 Vote

Tweet
The Lens and the Looker review by BF_SVHS

In this book you are introduced to the future, and then taken back to the past. You are shown the power of love and the power of the family. In the past you see how people had to live and how long it took for things to advance. You are shown that to survive, you must learn how to live without the future necessities that we now have. In this book you are shown life, love, and happiness all received without the technologies we have now.