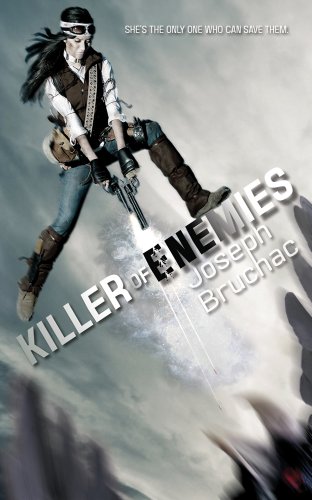 Killer of Enemies
Joseph Bruchac
Years ago, seventeen-year-old Apache hunter Lozen and her family lived in a world of havesand have-nots. There were the Ones—people so augmented with technology and geneticenhancements that they were barely human—and there was everyone else who served them. Then the Cloud came, and everything changed. Tech stopped working. The world plungedback into a new steam age. The Ones’ pets—genetically engineered monsters—turned on themand are now loose on the world. Lozen was not one of the lucky ones pre-C, but fate has given her a unique set of survivalskills and magical abilities. She hunts monsters for the Ones who survived the apocalyptic eventsof the Cloud, which ensures the safety of her kidnapped family. But with every monster she takesdown, Lozen’s powers grow, and she connects those powers to an ancient legend of her people.It soon becomes clear to Lozen that she is not just a hired gun. As the legendary Killer of Enemies was in the ancient days of the Apache people, Lozen ismeant to be a more than a hunter. Lozen is meant to be a hero.
3 Votes

This story was about a girl named Lozen who lived in a dystopian future where everything electronic had been shut off by The Cloud. Our main character is Lozen; she's a Native American girl with unique abilities. She lives in Haven, a jail turned into a refuge for Earth's survivors.

What's this?
Killer of Enemies review by RB26GTR

What's this?
Killer of Enemies review by belliebuttons

Killer Enemies is about a 17 year old girl named Lozen, who is old enough to go out on her own. They did the right thing because Lozen is a very good hunter. She has killed a lot of these creatures to protect her family. Everything was just perfect in her world untill the tech center shut down. The tech center is where they all get help and try to live. When the center shuts down Lozen doesn't act like just like any girl. This girl is determined to be more than just another hunter, Lozen is going to be a hero.