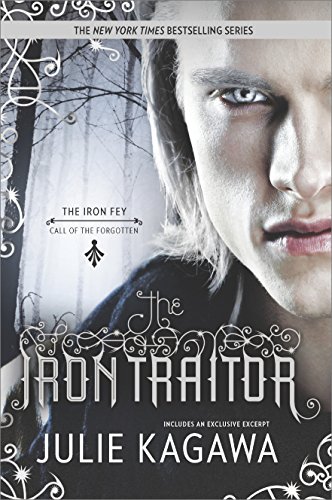 The Iron Traitor
Julie Kagawa
From the limitless imagination of New York Times and USA Today bestselling author Julie Kagawa, The Iron Fey series continues.WHEN WE MET, I HAD NO IDEA HE WOULD BE THE CATALYST...FOR THE END OF EVERYTHINGAfter his unexpected journey into the lands of the fey, Ethan Chase just wants to get back to normal. Well, as “normal” as you can be when you see faeries every day of your life. Suddenly the former loner with the bad reputation has someone to try for—his girlfriend, Kenzie. Never mind that he’s forbidden to see her again. But when your name is Ethan Chase and your sister is one of the most powerful faeries in the Nevernever, “normal” simply isn’t to be. Ethan’s nephew, Keirran, is missing, and may be on the verge of doing something unthinkable in the name of saving his own love. Something that will fracture the human and faery worlds forever, and give rise to the dangerous fey known as the Forgotten. As Ethan’s and Keirran’s fates entwine and Keirran slips further into darkness, Ethan’s next choice may decide the fate of them all.Don’t miss the first book in Julie Kagawa’s highly anticipated new series, SHADOW OF THE FOX, AVAILABLE OCTOBER 2, 2018“Julie Kagawa is one killer storyteller.”—MTV’s Hollywood Crush blog“The Iron King has the…enchantment, imagination and adventure of… Alice in Wonderland, Narnia and The Lord of the Rings, but with lots more romance.”—Justine magazine“Fans of the first 'Iron Fey’ series will be interested in seeing Meghan and her family again, while new readers will find enough detail to help them jump right in and enjoy the magic, adventure, and touch of romance.”—School Library Journal on The Lost Prince
3 Votes

What's this?
The Iron Traitor review by RavenWing

Ethan Chase just wants to get back to normal. But when your sister’s one of the most powerful faeries in Nevernever, ‘normal’ is hard to come by. Exspecially after vanishing into thin air for a week. Now his nephew’s missing, and he just might be on the verge of doing the unthinkable.  He’s dragged back into the Nevernever with Kenzie, the girl he’s forbidden to see. Can he stop his nephew in time before he sinks further into the darkness?

What's this?
The Iron Traitor review by Madi

Ethan Chase is not your average teenage boy. Even though he wants nothing more than to have a normal life, it's hard for him to escape the madness when his sister is a powerful faery who lives in the Nevernever. It's becomes even more difficult for him when he must help his nephew, Keirran, save his true love from Fading out of existence. He sets out with the two, as well as his girlfriend Kenzie, to find a way to stop the Fade. Unfortunately, it turns out to be even more difficult than he though it would.