The Hunt for the Well Hidden Treasure 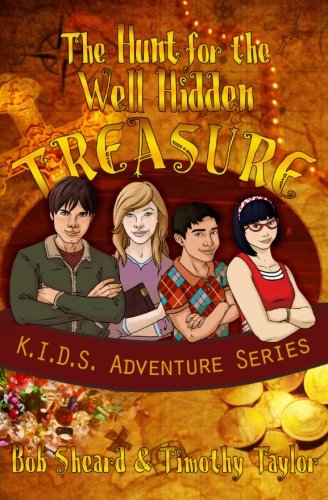 The Hunt for the Well Hidden Treasure
Bob Sheard, Timothy Taylor
In 1820 a notorious Spanish pirate was caught in a fierce battle along the California coastline, narrowly escaping into the foothills with a priceless treasure. Now, almost 200 years later, the legendary pirate’s skeletal remains are discovered in the quiet coastal town of Knightsbridge, California, along with a tantalizing clue to the treasure’s whereabouts. As news of the discovery spreads, the town is swamped with thousands of amateur treasure seekers as well as Treasure Finders Incorporated, a powerful organization with an impressive track record of discoveries. When classmates Will, Mikey, Susan, and Evelyn learn of the discovery, they are unable to resist the urge to join in the hunt. With Will's knowledge of the outdoors, Mikey's electronics expertise, Susan's computer wizardry, and Evelyn's photography skills, they are certain they can unravel the pirate's secret. Facing long odds, the seventh-graders embark on an adventure of a lifetime, discovering that the mystery deepens as they desperately hunt for clues, decipher historical landmarks, and match wits with their ruthless competitors.
1 Vote

Tweet
The Hunt for the Well Hidden Treasure review by Tenaya

When treasure is thought to be located in a usually boring coastal town in California, thousands of treasure hunters gather. They're all determined to find the treasure, but none of them want it more than four 7th graders. Will, Mikey, Susan and Evelyn know that they can find the treasure by each using their separate skills. But the treasure is hidden well, and the kids are up against a lot of grown-ups with all kinds of fancy gadgets.