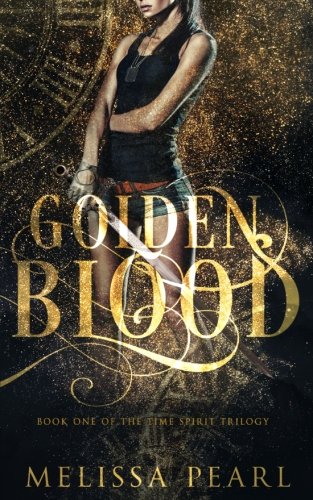 Golden Blood: Time Spirit Trilogy (Volume 1)
Melissa Pearl
Gemma Hart never knows when her father is going to whisk her back in time. Her toes start tingling and she has a few minutes to find a secret haven where she can disintegrate and appear in another time and place. While "across the line," her training and skills are put to the test as she completes a mission that will change history for the lucky few her father has selected. Gemma's parents are adamant that secrecy is paramount to her family's safety. If people knew what they were capable of, they could be "used and abused", as her mother always says. Afraid she might accidentally utter the truth and break the ancient oath of her people, Gemma spends her school days as a loner. Only one thing can throw her sheltered life askew... Harrison Granger.Harrison never expected to talk to the strange Hart girl, but after a brief encounter he can't stop thinking about her. He begins a campaign to chisel away her icy veneer and is met with unexpected consequences. As he slowly wins this girl over, he enters a surreal world that has him fighting to keep his newfound love and his life.
5 Votes

joythean
Golden Blood was about a strong girl who wanted a normal life apart from her time-traveling, over-protective family. Gemma Hart is the heroine of the story who has had bad experiences concerning her family's secret in the past and is stubborn about not making the same mistake twice. However, when Harrison Granger suddenly introduces himself into her life, everything she thought she could hide and protect becomes impossible to do. This novel emphasizes the connection between these two people and how their love dramatically affected all aspects of their life.
Rating:
5

This book is a fantasy novel. Gemma Hart has a secret that no one outside of her family can ever know. Gemma and the rest of her family are all time travelers.

Golden Blood: Time Spirit Trilogy by Melissa Pearl follows the story of Gemma Hart, a teenaged time traveler who has sacrificed her social life to keep the family secret. Gemma has become an expert at being alone and keeping things quiet, but that’s about to change. When she meets Harrison Granger, Gemma realizes love might be worth the risk- and that it might be time for her to start fighting for what she wants, rather than letting her controlling parents arrange every moment of her life.

Gemma Hart is the school freak. According to everyone, she's rude, insulting, and pushes everyone away. What they don't know is that she's a time spirit. Her father controls where and when her family is to go back in time to change small events in history that could make the future a better place. Gemma refuses to get attached to a friend, because that would involve trust, and she doesn't know who could ever keep a secret as big as hers. But then, a boy named Harrison sees a light in her, and they fall passionately in love.

Golden Blood: Time Spirit Trilogy (Volume 1) is a story of a girl named Gemma Hart. Gemma and her family travel through time to right wrongs and find special artifacts. While at school, Gemma falls in love with Harrison Granger. Knowing that her parents have strict rules against dating in high school, and dating outside of their clan, Gemma still feels an attraction to Harrison. Though Gemma is known throughout the school as a freak, Harrison is still infatuated with her.