Girl Z: My Life as a Teenage Zombie 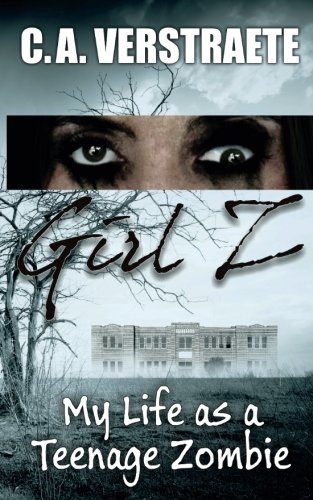 Girl Z: My Life as a Teenage Zombie
C.A. Verstraete
Sixteen-year-old Rebecca Herrera Hayes faces every teenager's biggest nightmares: bad skin, bad hair, and worse . . . turning into one of the living dead. Becca's life changes forever when her cousin Spence comes back to their small Wisconsin town carrying a deadly secret— he's becoming a zombie, a fate he shares with her through an accidental scratch. Now she must cope with weird physical changes and habits no girl wants to be noticed for. Then she meets Gabe, a good-looking part-Z like her and she fears she may be falling for him. But how can he, who shows hardly any Z symptoms, be interested in someone like her? Time is running out . . . and Becca needs his help as she and her cousin Carm search for their missing mothers and fight off hungry Zs. Most of all, she needs to find something, anything, to stop this deadly transformation before it is too late.
1 Vote

Tweet
Girl Z: My Life as a Teenage Zombie review by featherwhisker

Girl Z, by C.A. Verstraete, is about a time where there is a virus that can turn you into a zombie. However, if you are young and strong, there is a chance that it will only make you part zombie. This is what happens to the main character, Becca. The book is about her living with her aunt, dealing with her problems, and trying to find her mother who has gone missing. They meet up with a few more people on the way, some human and some part Z, as they're called.