A Force of Will A Shakespearean Fantasy Adventure 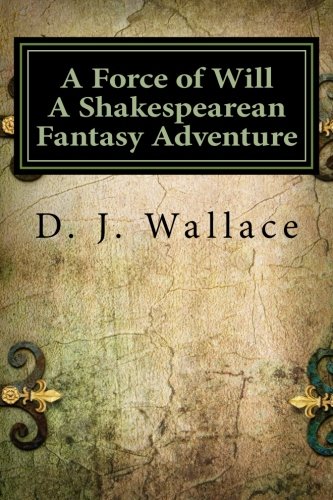 A Force of Will A Shakespearean Fantasy Adventure
D.J. Wallace
In the great land of Nebula, all boys reaching the age of eighteen must undertake a dangerous initiation into manhood. Will of Harken, a Prince of Noble blood, is no exception. On his eighteenth birthday, Will is sent alone to a desert isle where he must kill a vicious shape-shifting beast. The beast will test all of Will’s courage and resolve, but no more so than the evil men, who in his absence have murdered his father, and are now out to kill him. Will escapes the assassins, only to be kidnapped by sky pirates who pilot him thousands of miles from his home to be sold into slavery. Thus begins an epic journey that will take Will into the most savage and fantastical worlds ever imagined. Inspired by the works of Shakespeare, driven by the winds of Homer, and molded by the imagination of one of Hollywood’s greatest mythmakers, Mr. Wallace has invented an Elizabethan Fairy Tale and Sci-Fi Fantasy Adventure story of the grandest order. Written with a nod to the poetry and style of the Bard, those who love Shakespeare are assured of a fantastic read. And for those who love Fantasy and Adventure, be prepared for a ride on one of the most incredible literary roller coasters ever invented. Welcome to the strange and beautiful world of D.J. Wallace.
3 Votes

Ah, it is a lovely night, and a boy becomes 18. Oh, no! "A Force of Will A Shakespearean Fantasy Adventure" is about an 18 year old boy named Will who has a journey to slay a beast to prove his manliness, but something goes wrong, and a few lives are lost. Will is given powers beyond compare to succeed in his journey. He does not know how he will come back home, and he doesn't know what shall happen to him. And with something lurking, or someone...will his powers come in handy, or will he need the help of others along the way? Will he return or meet his demise trying?

What's this?
A Force of Will A Shakespearean Fantasy Adventure review by awalker10

Set in a land both futuristic and prehistoric, this fantasy story features the protagonist Will. Will, as all men do at his age, undergoes a coming of age ceremony, a dangerous test of strength and courage. But for him, something goes wrong. Events occuring at the castle during his test change his life forever, and force him to flee before those who wish to kill him. With the king, his father, murdered, and his mother under the sway of the man who killed him, Will has no one to turn to and must use his wits, courage, and spirit to help him through the problems he encounters.

What's this?
A Force of Will A Shakespearean Fantasy Adventure review by cshattan

Back in the time when boomerangs and swords were considered state-of-the-art weapons there lived a boy attempting to become a man.  His name was Will, heir to the Nebulan throne.  In Nebula, it is tradition for all boys turning eighteen to complete a quest and prove themselves men.  But as soon as Will leaves the kingdom to slay a fierce beast, things begin to turn bad.  His father dies, and his uncle, the Duke, claims the throne.  Will stumbles upon the royal guard, who attempt to slay