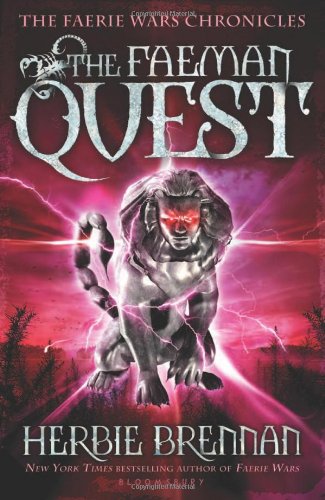 The Faeman Quest
Herbie Brennan
Herbie Brennan's popular and critically acclaimed Faerie Wars series is well known for its cast of magical characters, hilarious dialogue, and wildly inventive flights of fantasy. Now, with The Faeman Quest, Brennan returns to the world of Faerie to introduce a new character - Mella, the daughter of King Consort Henry and Queen Holly Blue. When Mella accidentally travels to the country of Haleklind, she discovers rebel forces preparing an invasion using a terrifying new magical weapon.This novel features old favorites-Brimstone, Pyrgus, and Lord Hairstreak's head-but readers will identify immediately with Mella, whose stubborn streak and fiesty daring must save the Faerie realm from mass destruction.
1 Vote

Teen-aged Cumella is faerie royalty. She has traveled to the human world to see where her father grew up. Little does she know that here absence has thrown her parents into a fierce worry. Queen Blue and her husband King Henry are now desperately looking for their missing daughter. To add to the chaos, the dark lord Hairstreak is planning his rise, hiring an assassin to capture the king and queens daughter. Will the two parents find their child before this ruthless killer does? Find out in Faeman Quest.