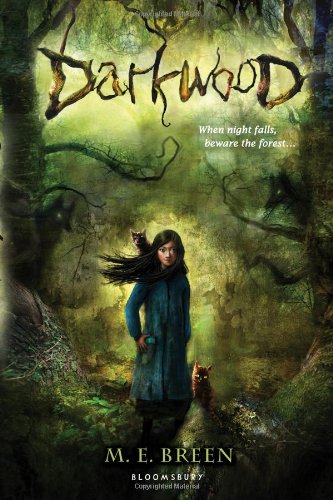 Darkwood
M. E. Breen
Darkness falls so quickly in Howland that the people there have no word for evening. One minute the sky is light, the next minute it is black. But darkness comes in other forms, too, and for thirteen-year-old Annie, the misery she endures in her Uncle's household makes the black of night seem almost soothing. When Annie escapes, her route takes her first to a dangerous mine where a precious stone is being stolen by an enemy of the king, and later to the king's own halls, where a figure from Annie's past makes a startling appearance. All the while, reported sightings of kinderstalk― mysterious, wolf-like creatures that prowl Howland's dark forests―grow more frequent. Eloquent, suspenseful, and imbued with fairy-tale motifs found in The Brothers Grimm, this is a riveting coming-of-age story of a girl who must learn to trust her instincts if she's to lead the people she is destined to rule.
2 Votes

Annie lives in a land of mysterious darkness where people fear the woods and the creatures within them. Annie thought her life in this creepy darkness would never change, but one day she is forced to escape from her home and enter the woods. On her journey, Annie discovers some dangerous mysteries that she must unravel. She meets new friends and is reacquainted with old ones and in this adventurous tale Annie's strange fate is revealed.

What's this?
Darkwood review by LWin

Darkwood is the tale of a thirteen-year-old girl named Annie. She lives in a place called Howland, where there seems to be no sunset. One minute, it's light. The next minute, it's dark. She attempts a daring escape from the house of her near abusive aunt and uncle and finds some odd things during her journey.