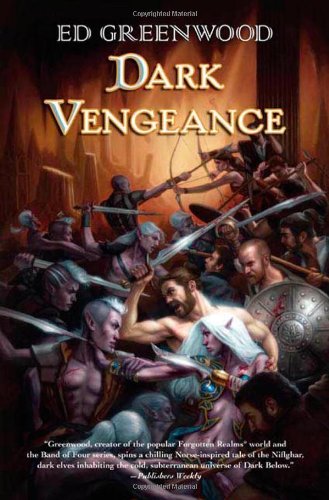 Dark Vengeance
Ed Greenwood
Orivon Firefist was captured as a six-year-old child by the Nilfghar—the dark elves—who attacked his village by night on one of their surface raids. Fifteen years later, he was a moon-pale, scarred, muscular giant of a man, who  spent his days at forgework for a dark elf family. He had been trained (and flogged and ordered about) by the beautiful Tsarnarra, a lash-wielding matron who is icily cruel, but proud of the slaves that she has trained.   Through all of this, Orivon's spirit had never been broken and he rose up and opposed his underworld tyrants.  He has successfully returned to the surface world home that he thought only existed in his most distant dreams.   But the score is far from settled. Years of oppression and new revelations of the dark deeds of his former captors only fuel his forge of rage. And the fact that their evil still permeates the underworld only intensifies his desire for a dark vengeance.
1 Vote

Orivon Firefist was captured at the young age of six by the Dark Elves. There he was forced as a slave to blacksmith for a Dark Elf family. He later escaped and was working as a blacksmith in the surface world. New tensions between the under world and the surface world have caused Orivon to become angered and make an attempt to free his fellow captors. What Orivon doesn't know is that the under world has gone into chaos and is even more dangerous in its damaged state.