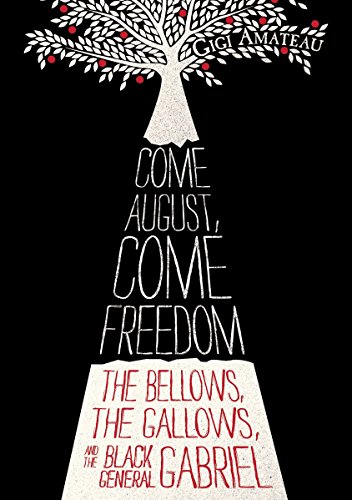 An 1800 insurrection planned by a literate slave known as "Prosser’s Gabriel" inspires a historical novel following one extraordinary man’s life.In a time of post-Revolutionary fervor in Richmond, Virginia, an imposing twenty-four-year-old slave named Gabriel, known for his courage and intellect, plotted a rebellion involving thousands of African- American freedom seekers armed with refashioned pitchforks and other implements of Gabriel’s blacksmith trade. The revolt would be thwarted by a confluence of fierce weather and human betrayal, but Gabriel retained his dignity to the end. History knows little of Gabriel’s early life. But here, author Gigi Amateau imagines a childhood shaped by a mother’s devotion, a father’s passion for liberation, and a friendship with a white master’s son who later proved cowardly and cruel. She gives vibrant life to Gabriel’s love for his wife-to-be, Nanny, a slave woman whose freedom he worked tirelessly, and futilely, to buy. Interwoven with original documents, this poignant, illuminating novel gives a personal face to a remarkable moment in history.
2 Votes

A forceful historical fiction story, Come August, Come Freedom by Gigi Amateau  chronicles the life of Gabriel, a black slave born in 1776. Gabriel is taught to read and write at an early age with his master's son and he works in the fields with his family. By his teenage years, he is already impressively strong and eloquent. His master sends Gabriel to become a blacksmith in Richmond, Virginia where whispers of revolution are heard from everyone. Toussaint, the general that emancipated the island of Saint Domingue, now  Haiti, inspires Gabriel to start a revolution.