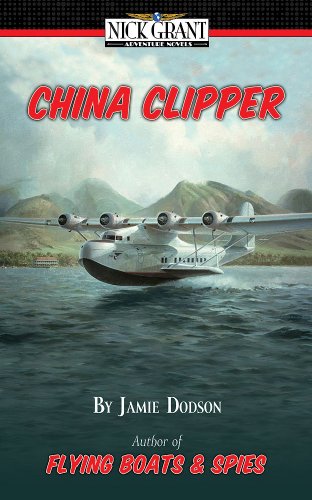 It's September, 1935, and senior year is tough for Nick Grant. He'd spent months building Pacific island bases for Pan Am's great flying boats, the Clippers. Life aboard the supply ship, piloting the Clipper, and fighting Japanese spies makes life at Alameda High School dull. At least his part-time job at Pan Am's Clipper base provides some relief from the monotonous routine of high school. Suddenly, a series of strange accidents cast suspicion on Nick and a Japanese-American mechanic who has become Nick's mentor. Has Japanese master spy Miyazaki returned to threaten the Clippers? Only Nick's quick thinking had intervened and stopped Miyazaki in the earlier attempts to destroy the flying boats. If the spy has returned, Nick will need help in stopping him--but from whom? The FBI ignores his suspicions and most of his co-workers think Nick is imagining things just to get attention. Then two new teens enter his life and things only get worse.
2 Votes

Nick is back in another book, but this time instead of going overseas, he's back at school and has managed to get a job working on the China Clipper, a "flying boat". But some force is determined to not the plane fly. Nick is sure his old enemy Miyazaki is to blame, but is he working alone or does he have acomplices hidden everywhere? There's also Haas who's loyalty has been shifty, the two new kids at school, Rodger and Nancy, but they've been behaving suspiciously too. Nick may just be alone on this one.

TKono
"China Clipper" by Jamie Dobson is an adventure book set
in the twentieth century.  The protagonist Nick works for
Pan Am as a mechanic while still in high school; he has
big dreams of becoming a flight engineer and maybe someday
a pilot.  However, he is stuck with the FBI as he is
involved with hunting down the murderer of his former
boss.  This is the second book in a series, but the author
Rating:
4
Content Rating: