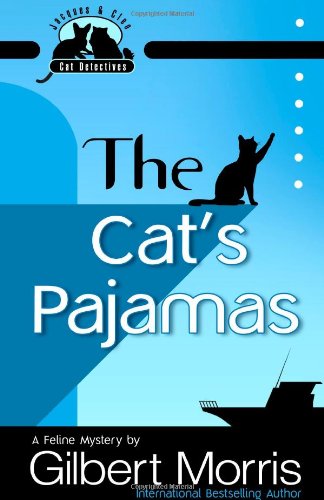 The Cat's Pajamas
Gilbert Morris
Readers of mysteries and cat–lovers alike will devour this second whodunit in the Jacques & Cleo, Cat Detectives series by bestselling author, Gilbert Morris. Hollywood comes into the lives of the newest residents of Gulf Shores, Alabama. Jake Novak and Kate Forrest have settled into the beautiful beach house left to them by a distant relative. Cat–hating Jake busies himself working on his novel in his upstairs apartment, while Kate gets involved in a beach ministry to young people. When New Leaf Productions arrives to film a movie, the locals are fascinated by the glamour of the actors. But when a cast member is murdered, followed quickly by a second killing, the town of Gulf Shores becomes worried. Jacques the Ripper has solved one murder and when he and Cleo are recruited to be in the movie, Jacques throws himself into nosing around for clues—and a murderer. About this series: For years, mystery readers and cat lovers alike have devoured the suspense novels by Lillian Jackson Braun, Rita Mae Brown and others, in what has developed into the bestselling cat–mystery genre. Now, veteran fiction author Gilbert Morris joins the ranks of those prestigious novelists with his Jacques and Cleo, Cat Detectives series, destined to become a welcome addition to this genre by feline fanatics everywhere.
1 Vote

Jake Novak and Mary Katherine 'Kate' Forrest share a beach house in White Sands, Alabama, which they inherited together from an extremely wealthy, elderly, deceased relative.Kate's cats, Cleopatra 'aka Cleo' and Jacques the Ripper, are chosen to be in a movie which is being filmed near their beach-side residence. Residents of White Sands are excited about movie stars being in their small town, but when a murder of one of the cast members occurs, quickly followed by a second one, everyone is scared for their own safety.