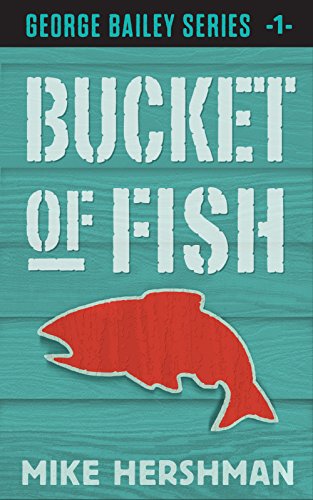 BUCKET OF FISH
Mike Hershman
One day, after fishing on the pier at Hamilton Island in 1934, 13 year-old Walt Jenkins saw two men load a body into the back of a Model-T Ice Truck. He ran away, but left behind his Bucket of Fish. When he returned later, the Bucket of Fish was gone! Walt and his friend George Bailey (GB) set out to solve the mystery. The boys soon find themselves tracking down bootleggers, a crooked policeman and a hired killer. Their detective work involves Walt pedaling hard with GB on the handlebars, George Bailey shining a killer’s shoes for 5 cents and his girlfriend Sharon disguised as a 7 year-old taking notes in the next booth while crooks plan another murder. Her pencil is hidden in a doll named Alice.Bucket of Fish is the first in a four book series. The other three are available on Amazon. They involve a stolen diving suit, a shipwreck, the murder of a paddleboard racer, and a missing Black Mamba named MargieThe books are fun and fast-paced with short chapters. The kids solve mysteries with the aid of a homemade boat trailer and in the last book, GB's Model T.
1 Vote

Bucket of Fish is a book about Walter Jenkins and his best friend George Bailey. They are normal kids for 1934; they struggle to get by on the little money they have. As such, Walter fishes as much as he can so that his family doesn’t have to buy food.  It is on one such occasion that he is coming back with tons of fish. On his way home, he passes by a dumpster and sees a pair of nice new shoes. Wondering why someone would throw them out, he tries to pick them up and bring them with him, but he stops short.