Mike Hershman was born in 1944 and is a lifetime resident of Southern California. As a boy he loved surfing his balsa wood longboard with his pals. He is also a fisherman and has enjoyed catching everything from a small Perch at the Manhattan Beach Pier in 1954 to a large Marlin off Cabo San Lucas in 1981. He now has fun fly-fishing on his float tube on Lake Crowley.

Mike retired in 2006 and decided to try writing books for boys. Over the next five years he wrote 11 books. He then became a Tour Guide on the Battleship IOWA. The famous World War II ship, which could fire shells weighing as much a VW bug 24 miles, is located near Mike's home in Rancho Palos Verdes.

In 2017, Mike decided to dust off his manuscripts and publish them on Amazon. The first five are his George Bailey Series and Runs Good No Reverse. He plans on adding the others over the next few months. They include Dear Sgt. Sherlock - a mystery set in World War ll. The story is told through letters written by a Marine in the South Pacific, his younger brother at home in California, and their friend - a Japanese boy at the Internment Camp at Manzanar. Another book is the story of a California boy living with his aunt and uncle in England during the Blitz. He and his cousin keep track of German bombers from their bedroom --also known as Trucksbury Bomber Command.

Joining LitPick today for Six Minutes with an Author is Mike Hershman. After retiring, he turned his attention to writing books for boys. He also became a tour guide for the Battleship IOWA, a famous World War II ship. This period of history has been an inspiration for some of his books.

I actually started writing when I retired almost 11 years ago. I’ve always been an avid reader, and after a career in the commercial mortgage business, I thought it would be fun to “follow my bliss” and try writing. I set up my den and tried to figure out what I should write —tried to imagine myself in a turtleneck and sandals.

I like authors as diverse as Paul Theroux, John Steinbeck, George Elliot and David McCullough. I really enjoyed Theroux’s travel books and at first tried doing a low budget imitation by going on morning bike, kayak, and hiking trips around Southern California.  I remember Theroux reading Crime and Punishment in The Patagonia Express on his train trip from Boston to Tierra de Fuego. I read Billy Budd on breaks after kayaking Newport Harbor.  I wrote something called Mike’s Bike about my travels, which happily gathers dust in my closet.

My favorite book and scene is from Cannery Row where Steinbeck describes the music created by bums snoring inside large different sized pipes in the park.

Read as much as you can and have fun practicing. I look at writing, even at age 72, as a craft not easily learned.

In my den surrounded by pictures of the people I love

Mike, thank you for joining us and for writing books that get boys hooked on reading. You remind us that it’s never too late to “follow your bliss.” 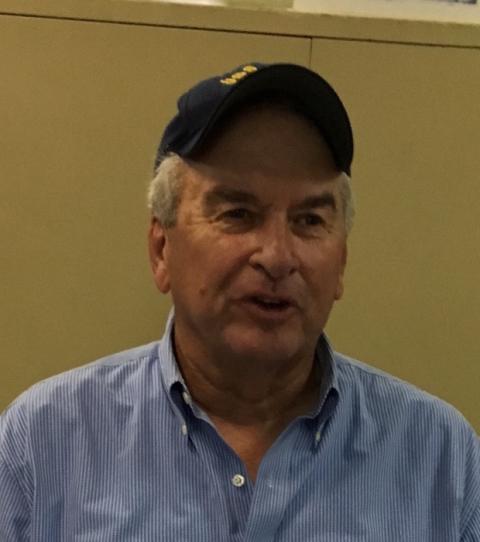