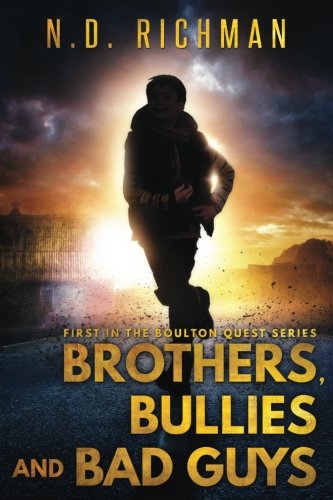 Brothers, Bullies and Bad Guys
N.D. Richman
One troubled, the other trouble One regrets, the other hates One builds, the other destroys Their parents are kidnapped in a home invasion and Christopher and Michael must unite or die in their quest to find them. Adventure turns to mystery when the brothers follow a hunch leading them over the Pacific Coast Mountains, across the ocean, and to a fortified island where they fight for their lives with tragic results.
1 Vote

Brothers, Bullies, and Bad Guys is a book about brothers, Chris and Michael, and their amazing travels. Chris was already lying in bed when his brother Michael finally came in for the night. Michael had been out bullying with his buddies again, as usual.

"Let me start off by saying that this was a well-written book, a powerful
book, and at times a truly moving one. A meaningful story that keeps you on
the edge of your seat! I really like this writer. His writing is so engaging
and easy to immerse in. Things happen, both good and bad, and he does it
without pulling punches. Tissues will be required."