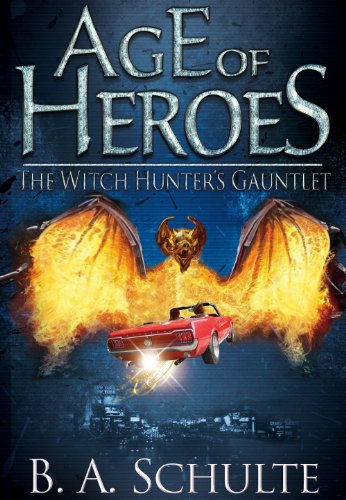 Age of Heroes: The Witch Hunter's Gauntlet
Karen Hart, Bret Schulte
"Buffy the Vampire Slayer meets Harry Potter!"One day 14-year-old Samantha Hathaway's biggest problems are snarky cheerleaders and co-workers at the mall, and the next day she finds herself the prime suspect in the theft of a powerful magical artifact that could spark a war between magic and science.For generations the Hathaway family has protected the world from the secret dangers of magic, monsters, and mad science. As the last heir to this proud legacy the suburban couch potato is recruited into Miller's Grove Academy, an elite new school full of inventors, monster hunters, video game champions, pop stars, and wannabe world conquerors. Between the new classes, hover board experiments, vampire attacks, and impending doom Samantha makes new friends and vicious new enemies.Samantha and her new friends must navigate a dangerous secret world to identify the real thief, defeat a resurrected sorcerer, and stop the coming war.Worst. Freshman Year. Ever.
2 Votes

Since the death of her parents, the fate of the world is in the hands of a college aged girl named Samantha Hathaway. Instead of having a normal freshman year, her parents's foe, Alexander Nero, decides to contine the fight between magic and non-magic people by accusing Samantha of stealing multiple magical artifacts that he actually stole. One of these magical artifacts was used to bring people from the dead back to life. To clear her name and save the world, Samantha and her friends have to find the witch-hunter's gauntlet from the clues her parents left her.

What's this?
Age of Heroes: The Witch Hunter's Gauntlet review by Corderojose10

The book I read was "Age of Hero’s: the Witches Gauntlet" by B. A. Shulte. The main character of the story is a young girl name Samantha Hathaway.