Vampire Addiction: The Vampires of Athens, Book On... 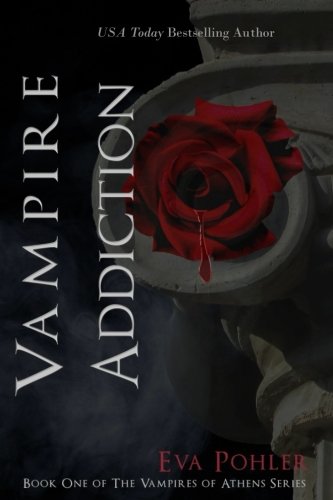 Vampire Addiction: The Vampires of Athens, Book One
by Eva Pohler
Age Range - 12 and up
Genre - Adventure

Vampire Addiction: The Vampires of Athens, Book One by Eve Pohler is a creative take on vampires and is the start of what promises to be a fascinating series. The book begins with Gertrude “Gertie” Morgan spending her senior year of high school in Greece, something she’s not too excited about, but it does get her away from her uncaring mother. Once in Greece, Gertie quickly realizes that there’s a secret Athenians are reluctant to share with outsiders - vampire community. The locals call these vampires “tramps” and look down on the humans who become addicted to their bite. This is perfect for Gertie since she is a self-described vampire expert. Gertie is also introduced to her host family’s friend, Hector, a student in her new high school that seems to be more than he appears. Greek gods, an uprising of the vampire community against the humans, and a love triangle all come together to change Gertie’s life, maybe not for the better.

I liked this book the more I read it. Pohler did a good job setting the pace and introducing all the main characters and their backgrounds. The secrets of the vampires were sprinkled throughout the book, making it engaging to read. There were pockets of action interspersed with Gertie’s more emotional moments. I also really liked the inclusion of Greek mythology and how the Greek gods are incorporated with vampires.

On the negative side, the love triangle between Gertie, Hector, and a vampire named Jeno was predictable and at times, Gertie’s decisions were obvious. I also would have liked to know more about Gertie’s relationship with her mother and how they got to the place where Gertie feels unloved and unwanted.

Vampire Addiction ends with a cliffhanger. I will be reading the next in the series. If you like books by Rick Riordan, you may want to consider The Vampires of Athens.

There are vampires biting humans, references to the Maenads (women who drink with the Greek god Dionysus and abandon their families), references to child death
KEYWORDS

Read more reviews by this Litpick Book Reviewer: DrDayna
Recommend this book and review to your friends on Facebook