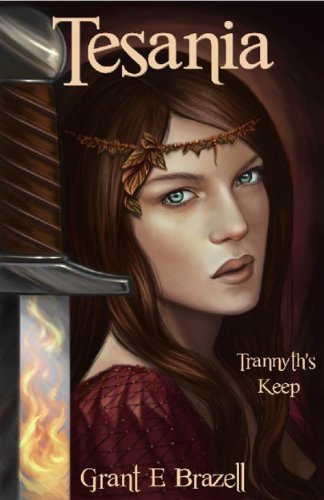 BUnd_BCL
Age at time of review - 10
Reviewer's Location - Baltimore, MD, United States
View BUnd_BCL's profile
Tesania is just the teenage daughter of a blacksmith in
her small village. All that changes when a troop of beasts
massacre her village and kill her parents. Now she's a teen
with a mission: to kill Tyrannth, the evil mage in charge of
the beasts. Along the way Tesania meets Deavon, a ranger who
is willing to help her get revenge. Together they assemble a
band consisting of the ranger Aldan, The soldiers Giddy and
Raim, The mages Nasha and Elddyn, Tean the monk, and Kailyn
the maid. All of them make the hard journey through the
mountains to Tyrannth's keep. But will it be worth the
struggle? Or will it all end in the keep before they even
have a chance?

This book is among the best I have ever read.
Tesania is so normal it's really easy to see yourself
as her. She 's just like you and me (except for, you know,
living in a medieval time period) only she's in extreme
circumstances. Later in the book you find out she's not as
normal as she seems, but it doesn't matter anymore because
you're already seeing from her point of view, feeling her
pain. As for Tyrannth and his keep, at first he seems so
unreachable, completely invincible. But as the group gets
closer they begin to see the cracks and the holes in
Tyrannth's keep, his plan for taking over, and Tyrannth
himself. It really shows how nothing is invincible and
nothing lasts forever. My favorite thing about this book
though, is that the good side is far from perfect as well.
The people in the capital city are petty, the heads of the
rangers, the soldiers, the mages, and the monks fight among
themselves and the King lets over half the people in Rilmir
City starve. Its not just the classic battle of good versus
evil. I'd recommend this book to fantasy lovers of all
ages.
Rating:
5
Content Rating:


Read more reviews by this Litpick Book Reviewer: BUnd_BCL
Recommend this book and review to your friends on Facebook