The Summer Palace review by LNeva 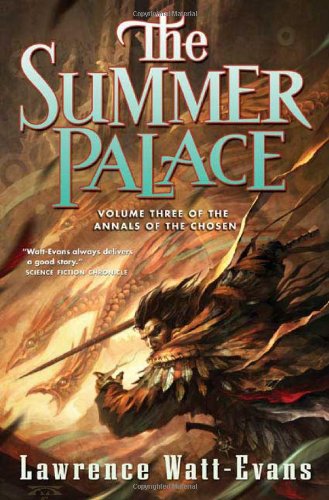 Sword has abandoned all magic. He is on the run from the Wizard Lord and has fled to the Uplands. The Wizard Lord - now a Dark Lord, although the people of Barokan can't see it, has made Sword a wanted man. This Lord has won over the people's trust, but is really deceiving them; he has already killed many of the wizards on the Council of Immortals and most of the Chosen to protect his power and position. Sword must befriend a tribe of Uplanders and learn their ways so he can survive until the winter. Then he will travel to the Summer Palace to fufill his duty to kill the Dark Lord. No one has ever survived an Upland winter. Will he survive to carry out his task?

I read this book without having read the first two books in the series, but I was able to infer much of what I needed; it's great as a stand-alone book. I was amazed, there wasn't much action at all, but the author kept it interesting. Sword's dedication was really astounding, but it also made his character seem to have a one-track mind. There was such detail in the wording that I felt like I could draw the rooms that the author was describing, and that I was really there. Many problems were resolved toward the end, but there are still many loose ends. Another book in the series must be planned! Overall, it was a really good read. I can imagine that it brings a lot of closure to the series, and I look forward to re-reading it after I've read the preceding books.


Read more reviews by this Litpick Book Reviewer: LNeva
Recommend this book and review to your friends on Facebook