Stuff - The Life of a Cool Demented Dude review by... 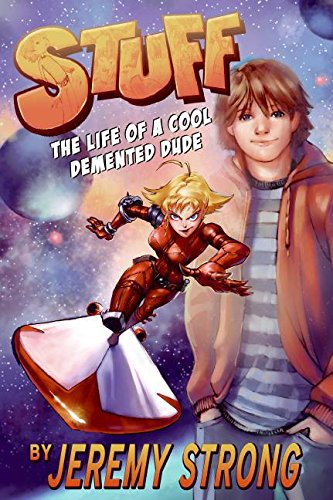 Stuff - The Life of a Cool Demented Dude
by Matthew S. Armstrong, Jeremy Strong
Age Range - 12 and up
Genre - Adventure

Life isn't always easy, and never has that saying been truer for Simon. His parents are divorced, and now Simons house has been taken over by GIRLS(Sherry Trifle, his dads girlfriend, and Natasha, his new stepsister)!!! What's more is that there is an evil man-obsessed rabbit that wants to kill Simon and his dad! But Simon finds solace in his comic book drawings and dreaming about a new girl in his class, Sky. But when Simons art teacher has him draw an anonymous comic strip for the schools magazine, what is everybody going to do when they realize the people in the comic strip are based on them? Will Simon survive having to live with girls in him home? Will Sky, the love of his life, ever like Simon back? Will Pankhurst, the rabbit, kill Simon before he has had a chance to live?? Find out in Stuff: The Life of A Cool Demented Dude

I did not really like the book at the beginning. It was confusing at first, and some of the English sayings (like thing thong and Citroen)were driving me nuts, because I did not know what they meant ( I didn't know about the glossary in the back). But after the first few chapters, I started to really get into it, and couldn't stop reading it! I felt that a lot of the things in the book were true, about the way Middle school is in real life. Overall, It was a good book, with a lot of surprises!


Read more reviews by Litpick Student Book Reviewer: JHap
Recommend this book and review to your friends on Facebook