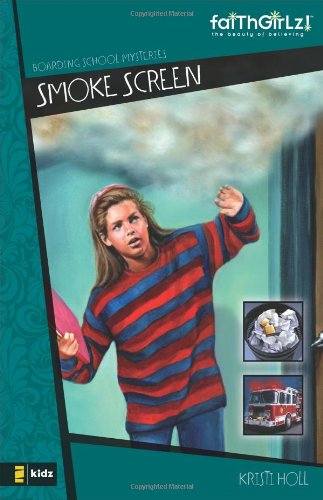 Jeri McKane doesn't expect much when she heads to her usual science class. Neither does Abby Wright, her best friend. When Abby goes early to the class room, Jeri shares some jokes with Tim, the assistant janitor. Then, that's when Jeri recognizes smoke coming from the science room. A loud explosion followed. lyndsey, a girl in Jeri's classes, came out of the room coughing with several other students. Abby wasn't one of them. Finally, Jeri and Lyndsey went in the burning room. Lyndsey doused the fire while Jeri looked for Abby. They didn't know that Abby had been taken away to the hospital. When the firefighters came, they looked for the cause of the explosion. In the trash they had found a disposable lighter that explodes after it burns for a while. After her class, Jeri visited Lyndsey in the infirmiry. The next weekend, Jeri goes to Lyndsey's house. As she turns to leave, she notices a tool shed is on fire! After putting it out, the firefighters find that this fire was set deliberately too! A witness saw one of Jeri's friends nearby at the time. Weeks later, Jeri was in the horse barn when she smelled smoke again. She climbed up on the loft and came face to face with the arsonist. After the fire was put out, the Head Mistress questioned Jeri. She told her who it was and things finally settled down. The arsonist had learned their lesson, and all was well.

I think this was a very good book. It never got boring when I thoght it would. It was going from one exciting thing to another. It is a good book for people who like a good mystery. Although sad things happened, it all came out good. I couldn't put it down!


Read more reviews by this Litpick Book Reviewer: AshBuch_BCL
Recommend this book and review to your friends on Facebook