A Smile of Fortune review by CHint1211 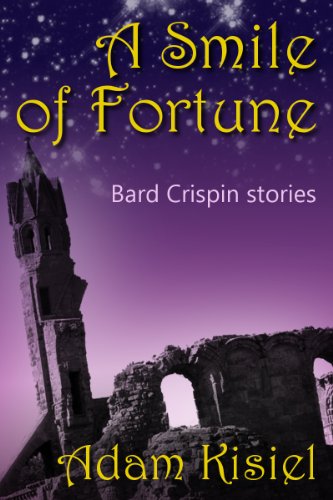 This book is about a bard who is traveling to his family member's funeral and gets caught up in a life or death situation. The Man starts on his way to Romarillan, the city where his uncle's funeral will be held, when he meets a Halfling. This is where his story begins. When they get to the city, the bard gets stuck in a situation where he is in debt to an inn and the only way to pay is through thievery from a friend. The bard steals a ring that turns out to be a powerful wizard artifact, the ring of air. The bard when to a store to sell the ring so he could get money to repay his debt. He got home with all the money he needed, but instead of a debt collector, he found men wreathed in black robes waiting to kidnap him. He is put in a life or death situation in a fight for the rings. The ring is nowhere to be found, so the assailants are struck at by the captured and are forced to flee with he rings they already have, fire, water, and earth. Then the end of the book arrives, where they all the friends are reunited and thieves are on the loose with three rings of immense power.

A Smile of Fortune was a very creative book dealing with lots of interesting characters and a bit of a confusing plot. I didn't understand the moral of the story or why the author created the story. There was little rhyme or pattern to the plot, so the story made little sense. In the beginning, when the bard meets the Halfling and the Halfling gets put in jail, he leaves him there, if they were friends, then why would he leave him there. That made no sense to me.

The book had several editing problems and no order to the story.  Personally, I didn't like the book and would rather the story had been explained better, the characters introduced more completely, and the story continued so you could learn what happens to the magic rings stolen by a thief and so the readers could learn more about the characters backgrounds.
Rating:
2
Content Rating:


Read more reviews by this Litpick Book Reviewer: CHint1211
Recommend this book and review to your friends on Facebook