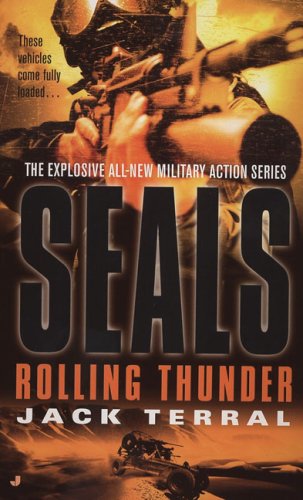 After several weeks of boredom and confinement aboard the USS Dan Daly, Lieutenant William "Wild Bill" Brannigan and his team of SEALS a.k.a. Brannigan's Brigands finally get a new assignment. There new mission (Rolling Thunder) is to patrol part of Afghanistan close to the Iranian border. After being shipped out to Shelor Fields, an air force base, they familiarize themselves with their new weapons and the DPV's (Desert Patrol Vehicles). Not soon after arriving they run into and armored caravan of Iranian Special Forces& Who actually turn out to be a terrorist group called Jihad Abadi. Even after that, the plot thickens more when the SEALS discover that the Jihad Abadi are trying to unite the terror groups scattered throughout Afghanistan and Iran to make a massive army, and then begin to make a modern day Persian Empire. Can Brannigan's Brigands stop the Iranians from uniting the Terrorists?

I thought this was a great book. It was a fast action-packed read. It also offered a very interesting glimpse into what Terrorist Leaders may be thinking. Also, it included a glossary on all of the military abbreviations like DPV and MRE. I think that it did contain strong language, so mature action readers should enjoy this book; however a 12 year old kid should not read it.


Read more reviews by this Litpick Book Reviewer: EH
Recommend this book and review to your friends on Facebook