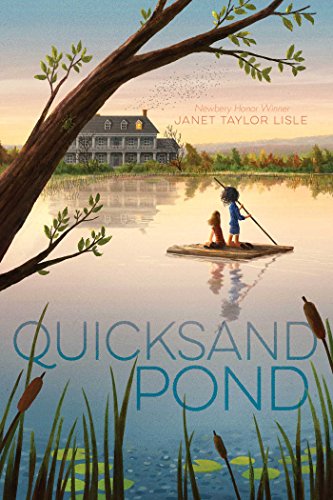 Jessie Kettle is at Quicksand Pond for a surpise (though not necessarily happy) summer vacation. She must deal with her too-quickly maturing older sister and insect-loving younger brother. To escape the drama and tension that the vacation creates, Jessie escapes to the pond, finding solace on the pond...and on the raft.

Terrie Carr has lived there all her life, though a difficult life it has been. Her family has taken up all the crudeness and superstitions that the town has posed at them, and she personally is getting the combined resentment of them and her father. The pond is her way to survive, to wait for the smoke to blow over, and to find friends.

Miss Henrietta Cutting is there to remember. In her old age, she still recalls all the times she spent on the pond with her father; the times she learned with her mother. Up until the point when it happened. Since then, she has lived in a shifting dream world, where the only thing that connects her reality is the pond.

The diction of the story is very simple, but I found the structure and the story very intriguing. I really formed a connection with the Kettle's, though mostly up to the point that I wanted to reach into the book and slap them around. However, the fact that I wanted to do this is praise to Ms. Lisle in creating such tangible characters.

One of the things that I really liked was the vagueness of the story. Both the developement of Terri and Henrietta were interesting because they seemed to be out of the loop of the "real" world. The idea of the pond being secluded from the ocean and the rest of town parallels their emotions and actions. Terri disappears every so often, but she will return to the pond as if nothing happened beforehand. Henrietta keeps going back to her past and living there in her daydreams and nightmares, but because it seems so real for her relates back to how she wants to pass on those memories to the next generation. It's a little hard to describe this kind of mood but I really enjoyed it. One of the things that it resulted in was that there was actually no definite conclusion. The mystery isn't solved, and the relationships are never really resolved either, but their is a sense of a continuing cycle despite some people leaving the loop.

Clean as clean can be.
KEYWORDS