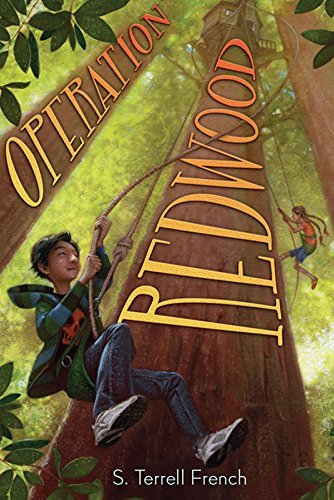 The book I read is called Operation Redwood. This book takes place in San Francisco and a Nothern California town called Willits. The main characters are Julian Carter-Li, his uncle Sibley Carter, and a girl who lives in Northern California named Robin Elder. Julian's uncle is a CEO of a big company and his company has been planning to cut down a forest of old-growth Redwood trees in Northern California. This is how Julian meets Robin. Robin sent an email titled "SIBLEY CARTER IS A WORLD-CLASS JERK." to Julian's uncle, but Julian found it before his uncle and deleted it. But not before forwarding it to his best friend, Danny Lopez. Julian continues to contact Robin only from Danny's house and together they think of a plan to get Julian to Robin's farm Huckleberry Ranch. Julian is supposed to be at math camp so when his aunt finds out he's not there, she goes on a rampage and goes to get him in Willits. I thought that was it, that they were done with Operation Redwood as Julian called their plan to save Old Tree Grove, but they were not. (Hint: Old Tree Grove is the forest of old-growth trees that Sibley Carter's company is going to cut down.)

I liked this book but it was not one of the best I have read. The book has some key things I liked and some I didn't. I thought the plot was a good one and I also really liked the author's ability to make me feel like I was actually looking at the settings. The main characters are Julian Carter-Li, Sibley Carter, Danny Lopez, Robin Elder, Bob Elder, Nancy Elder, and Ariel Glasser. Some of these characters I thought were real while some were a little off. I thought Julian, Danny, Robin, Nancy, and Ariel were like real people. Sibley was not the typical uncle to me. He and his wife were way to harsh and evil for real relatives. Sometimes it seemed like Sibley was a joke because he was to harsh or cold for an uncle. Bob Elder was nothing like I pictured him. I pictured him a balding sweet professor who loved the outdoors. Bob was almost as harsh as Sibley and he wasn't anything like I thought he would be. He was critical of Julian and was a pretty mean father towards Robin. I think the author thought she achieved her purpose of writing this book but I didn't really get it. I thought most of the story was pretty powerful and definitely age appropriate. I think the strengths are that the title is very captivating and the story has a good plot. But, there are some parts that don't really work. There are a few parts in the middle of the book were I got really bored and the parts didn't make much sense. I don't read many realistic fiction books and even though most of this book really is fiction it is not the kind I personally read. I don't think this book will be as popular as say Twilight or Harry Potter but it does target a certain group of people. This book targets people who like to help the Earth because it is really environmental. I have not read another book by S. Terrell French and for a fisrt I thought it was pretty good. I thought the book was interesting and in some parts dull. I sort of liked the ending not completely. I really think this book needs a prequal because a lot of the stuff talked about happened before the book and that makes it confusing. I learned a lot about Redwoods and about old-growth trees. Yes I would recomend this book to others because I found it to be very interesting and captivating.

Read more reviews by Litpick Book Reviewer: KMurp
Recommend this book and review to your friends on Facebook