Ken Karta: Battle of the Onoxmon review by EJoha05... 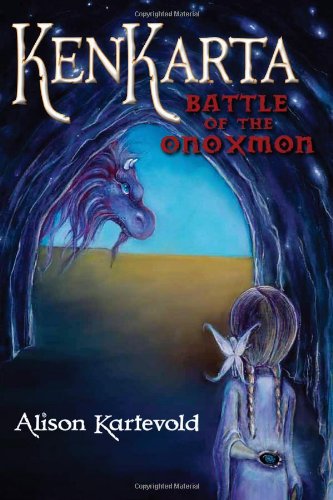 This book revolves around two different plots. That of the captured princess, Sophia, and the rescue efforts of her sister Veronica, the stable boy Zane, and her Equitier (horse) Dalminyo. This trio has to rescue Sophia from the evil dark lord Leamoldae and his rather grumpy dragon. They also have to find the Onoxmon, the most powerful piece in the universe, and return it to their father, who is one of the only people on the teir who can control its power. While this rescue effort is taking place, Princess Sophia is busy exploring the dragon's cave, finding fairies, and making friends with the dragon himself, Daelkay. So, how do you think this story will play out? Will Veronica be able to rescue Sophia, and will they be able to return the Onoxmon to their father in time to win the war? You'll have to read the book to find out, and while you're reading, watch out for the vicious habyahs!

I liked the book Ken Karta Battle of the Onoxmon. It has a good story line and vivid characters with real emotions. I think it's interesting how the plot splits into two separate yet connected plots. As soon as you understand the different terms in the book like "teirs" and "pieces" the story makes perfect sense. Even though the whole "princess captured by a dragon" story has been told many times, the author finds ways to make it fresh and exciting. The only critique I have of the story is that the beginning is sort of confusing, but it is a great story overall. I would recommend this book to people who like fantasy.


Read more reviews by this Litpick Book Reviewer: EJoha0511
Recommend this book and review to your friends on Facebook