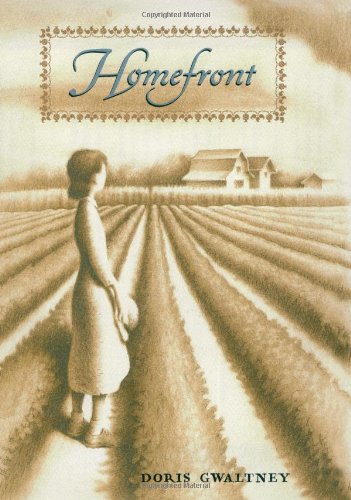 Homefront
by Doris Gwaltney
Age Range - 12 and up
Genre - Fiction

The book starts out rather casually with the main character, Margaret Ann, complaining about her lack of personal space. The reader finds out early that she's forced, due to a lack of room, to sleep with her grandmother, who claims that she doesn't, but snores. She has four siblings, Elizabeth and Johnny, the elders, and the younger twins, Paige and Polly, who she can't tell apart. Elizabeth, at the time, is just getting ready to leave home for college, and Margaret Ann wastes no time in claiming her room, and moving in once Elizabeth leaves, though she misses her sister. However, eventually her problems grow larger than her sister's absence. England is fighting a war, and her aunt and cousin- who she's never met before- come to stay with them while her uncle fights. She grow to seriously dislike Courtney, who at first appears rather snobbish, constantly complains about small injuries, and ends up with everything Margaret Ann thinks she should have for herself. Eventually, though, as Margaret's bother goes to join the Navy, and her uncle becomes 'missing in action', Margaret grows to understand Courtney's pain, and over a period of thim, they become wonderful friends.

Although the writing style was something I scarcely see, it was a refreshing read. I had my doubts at first- I've never bothered looking into the particular genre, and I wondered about gory details. However, it was far more interesting than I imagined, and the way that Margaret is so utterly human, compared to her fairy-queen of a cousin was almost amusing at first. I often wondered about life in that time for the families of soldiers off fighting, and it's very clear in explanation, and tends to get to the point. Margaret's family description is wonderful, and although I can't relate to her, I absolutely loved it.

Although this isn't something I'd personally condemn as inappropriate, there is some talk of body size in... various places. However, I doubt that many would be affected by it.
KEYWORDS

Read more reviews by this Litpick Book Reviewer: LSpro
Recommend this book and review to your friends on Facebook