The Great Tree of Avalon review by KFlo 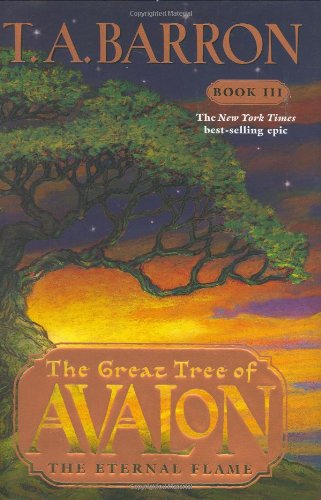 The Great Tree of Avalon
by T. A. Barron
Age Range - 12 and up
Genre - Adventure

This book is the third, and final, book in the series "The Great Tree of Avalon". The main characters: Tamwyn, Elli, Scree, and Brionna, are on a race against time to stop the spirit warlord, Rhita Gawr, and his servant, Kulwych, from conquering Avalon. Tamwyn is trying to climb the branches of the tree of Avalon to reach the stars. The stars are actually the gateways to different worlds: the spirit world and the Earth. Tamwyn is working to stop Rhita Graw from reaching Avalon from these gateways. The only way to do this is to travel through the River of Time. Along the way, Tamwyn meets some new people, and learns new things about some of his old friends. On the roots of the tree of Avalon, Elli must travel to the most dangerous place in Avalon, the realm of Shadowroot. Here, she must find a way to reach a deserted mine where Rhita Graw's servant, Kulwych, has created a deadly weapon, which Elli must destroy. On the realm of Woodroot, Brionna and her friends are trying to stop the Humanity First movement and its leader, Belamir, from unwittingly helping Rhita Graw to destroy Avalon. Instead they will be captured, and learn a dark secret about Belamir. Scree is on the realm of Fireroot, where he is trying to help a village of eaglefolk to re-write their shameful past, and to convince them to fight for the freedom of Avalon. Yet, despite the companions' efforts, nothing can stop the growing battle between Rhita Graw and the defenders of Avalon. In the air and on the ground, a terrible war will be fought to decide the fate of Avalon.

This book may seem to be just another fantasy story- but think again! This book has wonderful messages about the environment. It reminds us that everything in nature is connected, and that we must protect every part of the environment in order for us all to survive. Although the story takes place in another land, the message shines clear- that humans should not pretend to be above the rest of the environment, but rather protect and care for it. This is an important message for us all. This book also contains some important messages about growing up, friendship, and believing in yourself. The characters were well-developed. The book was also funny. I thought the battle scenes were too drawn-out, but I really enjoyed the ending of the book. I thought it properly wrapped-up the series in a satisfying way.


Read more reviews by Litpick Book Reviewer: KFlo
Recommend this book and review to your friends on Facebook