As Good As Anybody review by PFlo 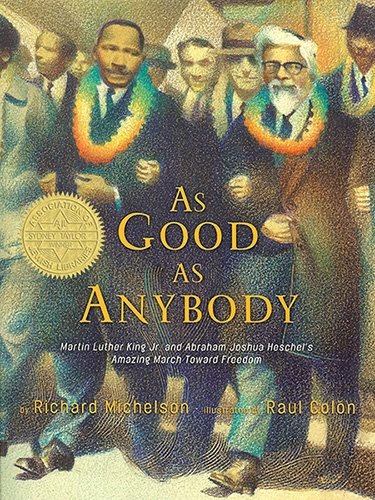 As Good As Anybody
by Raul Colon, Richard Michelson
Age Range - 12 and up
Genre - Fiction

As Good as Anybody: Martin Luther King Jr. and Abraham Joshua Heschel's Amazing March Toward Freedom by Richard Michelson and illustrated by Raul Colon is about the early life and beliefs of King and Heschel. King grew up in Atlanta, Georgia and encountered racism everyday. Herschel encountered anti-Semitism as a student in Berlin and Warsaw. He moved to the United States before the Holocaust. Both King and Herschel fought tirelessly against prejudice. Herschel joined King's march in Selma, Alabama. The two became close friends.

I give As Good as Anybody: Martin Luther King Jr. and Abraham Joshua Heschel's Amazing March Toward Freedom a rating of 7. Richard Michelson's book is a good introduction to the Black Civil Rights Movement and the Holocaust. I enjoyed how the author parallels the lives of King and Herschel. Perhaps because I am older, I was not the best judge of this book, but I always find it interesting to see what facts authors include and what facts they omit. For example, the author never mentions the Holocaust by name. The illustrator, Raul Colon, does a wonderful job with the pictures. They are very realistic. I would recommend this book for early elementary school students

Read more reviews by Litpick Student Book Reviewer: PFlo
Recommend this book and review to your friends on Facebook