The Crimson Shard review by Ravette 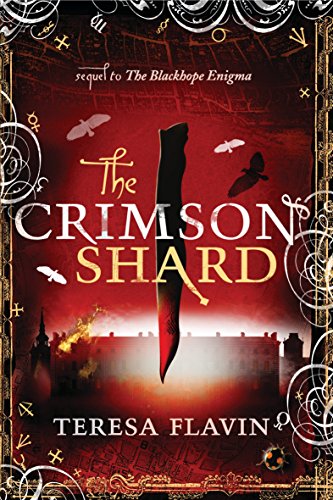 In The Crimson Shard, by Teresa Flavin, the main characters, Sunni and Blaise, go to tour a seemingly normal museum and discover what secrets lay within. Upon entering, they first see that nearly everything inside is painted; things such as cabinets, pets, and other household supplies. Their tour guide, Throgmorton, tells them it's referred to as trompe l'oeil, which is French for "fool the eye."  They continue on the tour, all the while, Blaise carries his sketchbook, drawing things that catch his interest. Noticing this, Throgmorton decides to show them both the Academy, and leads them up a stairwell and into a study that belonged to Jeremiah Starling, the painter of the house. In that study, is a painted door that, when 'activated', leads to the Academy. Sunni and Blaise are then brought through it and taken back in time, a time when Jeremiah was still alive in 1752. After discovering the door reverted back into a painting and won't open, Sunni and Blaise, with the help of Fleet and Sleek, escape the Academy and Throgmorton. Having parted ways, Fleet and Sleek go into hiding, while Sunni, having been disguised as a boy in the Academy, and Blaise attempt to look for a magician to help them reopen the door. While watching a magician in a theater, they are spotted by Throgmorton and nearly recaptured when the Featherstones and his friends save them. Sunni and Blaise are then questioned, and after explaining who they are and what they're after, Henry, and his sister, along with their friends, agree to help them return to their time. Wheatley, a close friend to Henry, decides to take them in and help them. He knows a way to recreate the red elixer, which will take him forty days. But in return, he wants something from them, as payment. He requests that if they go back to the future, they take him with them. Shortly after deciding not to take him, they encounter Throgmorton, who tells them the Starling Academy is going to be destroyed the following day.  Will they make it to Starling's house in time to escape or will they stay in the past and keep everything they learned a secret?

It was a wonderful and very enthralling read. I enjoyed the details the author used to describe eighteenth-century London; it made it much clearer and easier to visualize. I also liked how  Sunni and Blaise enjoy drawing and art, because I felt that I could relate. I also really liked the characterization, because every character had a very distinct and different personality from one another.

I'd recommend this book to anyone of at least fifteen years of age due to mildly grotesque details.
KEYWORDS


Read more reviews by this Litpick Book Reviewer: Ravette
Recommend this book and review to your friends on Facebook