City of Jade review by AReil 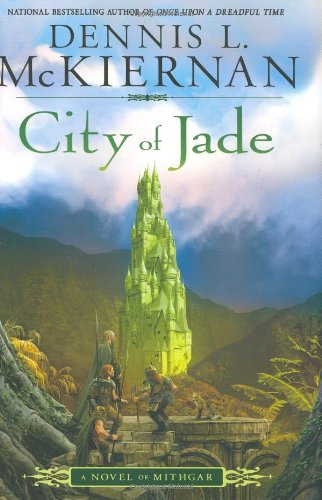 City of Jade
by Dennis L. McKiernan
Age Range - 12 and up
Genre - Adventure

The City of Jade is a stand alone novel in the series of Mithgar by Dennis McKiernan. It is the tale of an elf named Aravan and his true love, Aylis, as they embark on their beloved ship, Eroean. After years of fighting apart they join together, finally, to return to the thing they love most: sailing. They have no trouble acquiring forty men to sail, a war band of forty dwarves to protect and with their tiny Psyk friend, Alissa, as scout, the couple is ready to journey out into the world. There they find a strange jade statue that leads them to the mythical City of Jade, a place clouded in mystery and evil. Unknowingly, they walk into a trap that not all will survive.

When I first decided to read the City of Jade I expected to find a captivating story of danger and adventure. Unfortunately I found little of either. The City of Jade had a rather erratic plot line which did not flow continuously and had little to do with the summary. It reminded me of one of those sitcom flashback episodes, where the main characters do nothing but remember the past. Aravan and company were entertaining and slightly realistic, but carried on far too much about events that had happened in previous books. I, who has never read a Mithgar book before, found this extremely annoying. As mentioned before, there was little intrigue, except in the story of two sub-characters, the Warrows Pipper and Binkton, whose chapters narrated their Robin Hood-like escapades. I have to give McKiernan credit, however, for his attention to detail. Every scene on the Eroean was written with impressive knowledge of the ship. It felt like a sailor was describing what was going on and were the only scenes that read like McKiernan was actually talking to you.


Read more reviews by this Litpick Book Reviewer: AReil
Recommend this book and review to your friends on Facebook