The Chicken Squad review by WillB 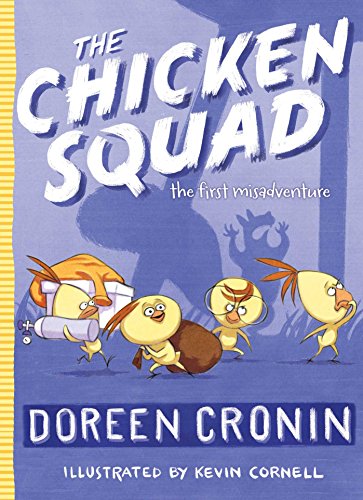 The Chicken Squad by Doreen Cronin is about some chickens and their squirrel friend, Tail, who have an adventure because something big and scary has shown up in their yard.  Tail, who has a good vocabulary, but does not know his shapes, tells Dirt, Poppy, Sugar, and Sweetie about the danger in the yard.  The squad’s mother, Moosh, seems to be missing, and it is up to the squad to get her back.  They plan to use camouflage, balloons, and rocks to take down the danger and save their mother.  Will their plan be successful?

I enjoyed The Chicken Squad.  The author uses lots of different animals in the story, even a dog narrator.  Doreen Cronin put tons of humor in the book, such as Sweetie’s carrot-dropping reaction to Tail’s story.  There are many other funny misunderstandings between the squad and Tail that lead to a surprise ending.  Kids from ages 5-9, who like humorous, silly books would like The Chicken Squad.

Read more reviews by Litpick Student Book Reviewer: WillB
Recommend this book and review to your friends on Facebook