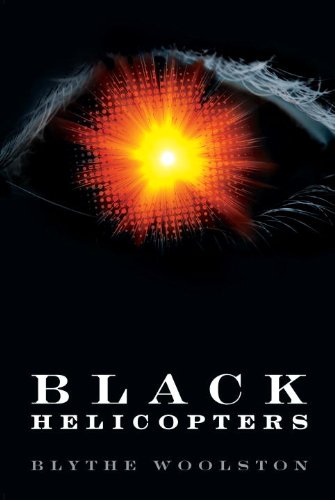 Valkyrie was hidden from society by her father, a very mysterious man. When her father is killed in an explosion, Valkyrie and her brother, Bo, escape and try to fend for themselves. The Helicopters, secret and black, terrify Valkyrie. What must she do to get away?

I would explain what It was like reading Black Helicopters as... Weirdly suspenseful. I was consternated by the odd way Blythe Woolston described this illusion of a story. It was a creepy mystery. If it was a little closer to the dark side it could have been a horror book! The style used to write the story was fascinating, but his characters were shady, and often they didn't stick with a strait path of morals. I have trouble reading a novel if I dislike the characters; the one person that kept me reading was Eric. I think the whole hatred for everyone but Eric actually added to the story. The storyline and plot were disturbing, the ending was crazy and the characters erratic, all-in-all, it was written brilliantly if you wanted to portray an overwhelming feeling of nothingness, and no moral. The setting was vague and unreal, I felt like I was in a haze. I liked the style, but I didn't really like the book. It was very creative and unique, but I wouldn't recommend this book to younger teens.