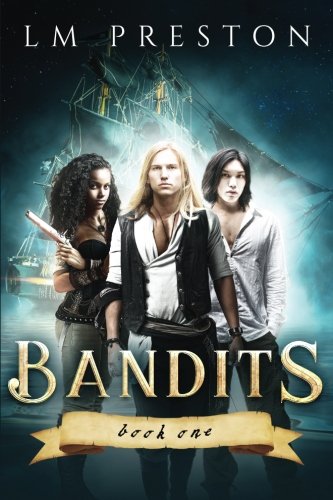 Flamingnet Student Book Reviewer SZel1211
Bandits, by LM Preston follows Daniel, his little brother Nickel, his cousin Faulk, and his best friend's kid sister Jade as they try to find a treasure that belonged to Daniel's recently murdered father. Along the way, they have to run from the thief who killed Daniel's father, plus save the world. The fact that they don't know who killed his father doesn't help, and the king's men chasing after them too, doesn't make their task easier either. To make matters worse, Faulk has a crush on Jade, though Jade's completely off- limits, as her brothers would beat up anyone who dared to look at her. Jade doesn't seem to understand that, and she in turn has a crush on Daniel.

The romance section of Bandits seemed a bit rushed, it went from Daniel's indifference to Jade romantically, to them professing love in a matter of days. It wasnt a page-turner, and I often had to go back a few pages, my mind having wandered without my realizing it. Nickel, the younger brother, seemed to be both innocent and young, and mature at the same time; though neither seemed to really capture Nickels age (ten). Jade was portrayed as different from other girls, as she was tough, which seemed as though it was a compliment to Jade, but came off (to me at least) as more of a slight against other girls than a compliment to her. All of the characters seemed to be vaguely similar, and there wasnt much in the way of character development. It wasnt the worst book I've read by far, but it was a quick-read, easily forgotten in a few weeks.

Read more reviews by this Litpick Book Reviewer: blue hen
Recommend this book and review to your friends on Facebook