Ada Legend of a Healer review by RHanse 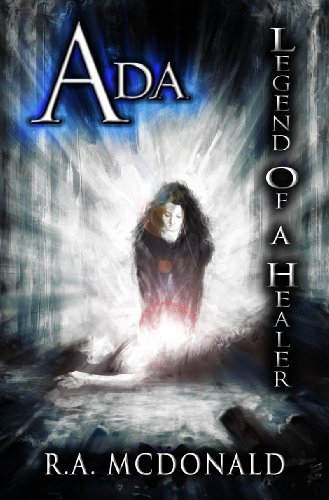 Ada Legend of a Healer
by R.A. McDonald
Age Range - 12 and up
Genre - Fantasy

Ada's life has never been easy. Shifted from one terrible foster home after another, she hasnt ever caught a break. She knows she is differentshe has abilities that make her capable of identifying health problems in others and herself and heal them. At fifteen, shes been inand been kicked out of eight horrid foster homes, when she finally gets contact with a family member, the only one shes ever had contact with, her Aunt Jessie. Once she is reunited with her aunt, she takes things into her own hands, and, after learning of her mothers past and possible survival, plunges into a fast-paced journey on the run from those who would abuse her ability, to find her mother. Her expedition will lead her to Canada, Paris, and more as she rushes to complete her quest, and, as she finds new friends, she will wonder where her happiness will fit into the equation. This book had a bit of a darker adventurous mood, but was also a bit of a coming-of-age novel, as Ada struggled to find herself and her purpose in the world and as an individual.

The overall mood of this book was a little bit sinister and gloomy to begin with, but it develops to become brighter as the main character finds herself and develops her talents. The descriptions left a lot to be wanting at some points and sometimes I think it wouldve benefited the story to slow it down a little, to explain more of what was going on, or add more character development scenes. At some times, I could picture the setting, but it happened very rarely, so I would suggest more of that, also, to add some more color. Even little details thrown in help, such as an adjective in front of the name of an object (ex: &the fraying lavender jacket& ) because it helps create a clearer picture of everything to see it like a movie in your head. The first person voice was appropriate for the storyline; it revealed Adas gradual transformation from start to finish in a way that helps the reader grow with her. Vulgar language and a couple of questionable or disturbing scenes included made it a PG-13 book. I felt like sometimes there were conventions errors (weirdly capitalized words, misplaced or missing commas, et cetera), but nothing that detracted from the story. This wasnt a just couldnt put it down book, per se, but it did have a bit of a drive to finish it, which made it easy to read. The ending was a cliffhanger for a purpose (I believe this is the first of a series), but it also had a sense of closure, or at least the reader feels like they and Ada both learned an important lesson: that everyone matters, and to try to help them, and also that everyones happiness counts as well. I would recommend this book to anyone who will appreciate a medium-sized read with some life lessons and self-discovery that will not mind a couple of bad scenes/crude language.

This book involves some crude language and inappropriate/disturbing images and scenes.
KEYWORDS

Read more reviews by Litpick Book Reviewer: RHanse
Recommend this book and review to your friends on Facebook