Worlds of the Golden Queen 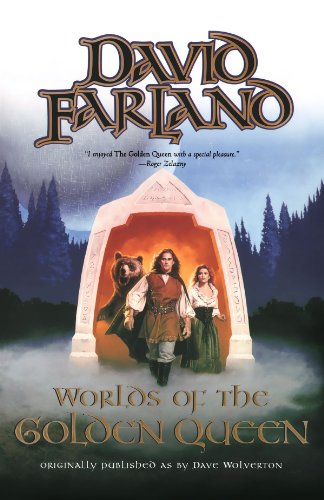 Worlds of the Golden Queen
David Farland
Originally published as two books, Worlds of the Golden Queen is a stellar tale of love, adventure, sacrifice, and war set in a fantastic future. In the first novel, The Golden Queen, the insectoid Dronons have slain the human queen Semarritte, thowing into chaos the ten thousand worlds over which she reigned. Desperate to save mankind, Lord Veriasse, her near-immortal consort, has created a new queen: Everynne, cloned from the dead original. Hotly pursued, Everynne falls in with cocky bodyguard Gallen O'Day; the pious Orick, an intelligent black bear; and the beautiful orphan Maggie Flynn. With Gallen and the others newly sworn to her service, the young queen begins the great struggle against the aliens. Leaping from world to world via an ancient system of instantaneous transport gates, the heroes face terrible dangers and great wonders as they seek the heart of the dronon worlds, carrying the battle straight to the enemy.In the second novel, Beyond the Gate, Maggie Flynn has become, by test of combat, the new Golden Queen. Gallen, Maggie, and Orick face an attack by Dronons on a planet where humans have achieved the pinnacle of genetic engineering. They must stop them while guarding the secret of Maggie's whereabouts, for she is only the Golden Queen until her champion, Gallen, is defeated by a Dronon challenger. In the midst of a slam-bang story, Farland raises and examines deep questions of humanity's definition and identity.
1 Vote

Tweet
Worlds of the Golden Queen review by VR

David Farland takes you on an adventure through amazing worlds, where there is knowledge on how to expand life, create new creatures/lifeforms, and so much more. But throughout the thousands of worlds there is suffering of people, for the Golden Queen Semarritte is dead, and now the Dronon are in control of the worlds. The Dronon are nasty creatures who have created chaos throughout the worlds. But there is hope to overthrow the Dronon by means of Semarritte's clone, Everynne.