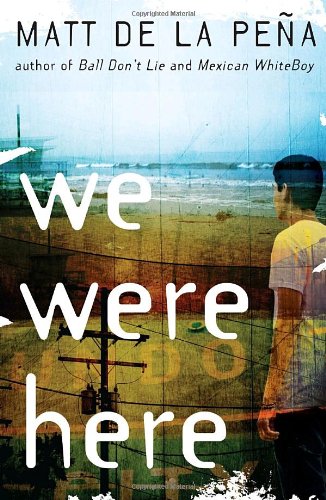 We Were Here
Matt De La Peña
When it happened, Miguel was sent to Juvi. The judge gave him a year in a group home—said he had to write in a journal so some counselor could try to figure out how he thinks. The judge had no idea that he actually did Miguel a favor. Ever since it happened, his mom can’t even look at him in the face. Any home besides his would be a better place to live.    But Miguel didn’t bet on meeting Rondell or Mong or on any of what happened after they broke out. He only thought about Mexico and getting to the border to where he could start over. Forget his mom. Forget his brother. Forget himself.    Life usually doesn’ t work out how you think it will, though. And most of the time, running away is the quickest path right back to what you’re running from.   From the streets of Stockton to the beaches of Venice, all the way to the Mexican border, We Were Here follows a journey of self-discovery by a boy who is trying to forgive himself in an unforgiving world.An ALA-YALSA Best Book for Young ReadersAn ALA-YALSA Quick Pick for Reluctant ReadersA Junior Library Guild Selection"Fast, funny, smart, and heartbreaking...The contemporary survival adventure will keep readers hooked."-Booklist"A story of friendship that will appeal to teens and will engage the most reluctant readers."-Kirkus Reviews
1 Vote

This book is called We Were Here by: Matt de la Pena. It's about a young boy named Miguel, who has made some mistakes in his life, but that doesn't mean he doesn't have feelings too. Miguel gets sent to a group home for his big mistake, and meets up with a few other guys that have messed up too. Later on in the book, Mong, the crazy kid who smiles weird and fights all the time, and Rondell, all brawns and no brains kind of guy, escape the group home.