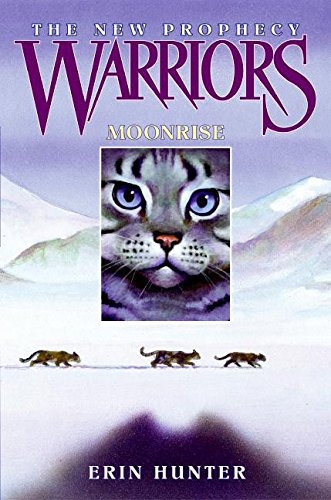 Warriors: The New Prophecy #2: Moonrise
Dave Stevenson, Erin Hunter
Erin Hunter’s #1 nationally bestselling Warriors series continues with the second book in the New Prophecy series!The second book in this second series, Warriors: The New Prophecy #2: Moonrise, brings more adventure, intrigue, and thrilling battles to the epic world of the warrior Clans.Moons have passed since six cats set out on a journey to save their Clans. Now they are traveling home again, but on their way through the mountains, they meet a tribe of wild cats with a secret…and their own mysterious prophecy to fulfill.In the forest, Firestar and Leafpaw watch ThunderClan’s world crumbling around them. Will the questing cats make it back in time to save the Clans, or will they be too late?
1 Vote

The four cat clans and their forest homes are being destroyed by two-legs(a.k.a. humans). Their only chance of survival lies with four chosen cats. These cats, accompanied by two others- Stormfur and Squirrelpaw- go on a mission to try and rescue the clans. While crossing over the mountains, they meet a Tribe of cats. The Tribe cats declare that Stormfur was sent to them to save them from Sharptooth- a mountain lion who has been picking off the Tribe cats one by one. In the end, one cat will not return home.