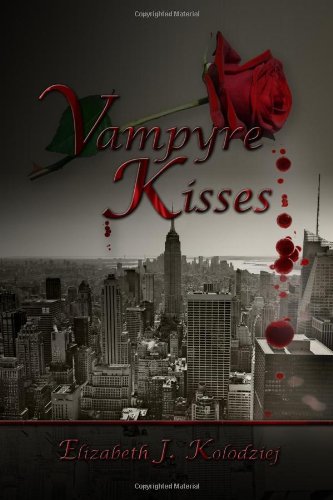 Vampyre Kisses
Elizabeth J. Kolodziej
Vampyre Kisses is an enthralling story about a young woman named Faith, who seems content with her life, but deep down craves more excitement. Then a mysterious man named Trent enters her world and everything changes. Surprising to Faith, Trent is a green-eyed vampire from Ireland. She is even more amazed to find out that she is a witch, and the last of her kind. Faith learns that she is destined to restore her witch line and becomes more powerful as she gains confidence and knowledge, but danger lurks everywhere -- especially when unknown assailants steal the most important gems from the vampire master and werewolf royalty. Now surrounded by a world filled with mystifying vampires and werewolves, can Faith gain enough power to help her friends and rescue the stolen gems? "A welcome addition to the vampire/werewolf corpus. Building on traditional legends, Kolodziej creates a world both vast in its sweep and compelling in its details." Stephen Delaney -- Writer, Teacher & Editor Elizabeth J Kolodziej, a young fiction writer originally from Torrance California, is a smart and original thinker who has researched the origins of vampires, werewolves, and witches for many years. She writes her books from the knowledge she has gained while trying to be as original and inspiring as possible. Her books encompass both true folklore facts along with innovative ideas motivated by the great writers around her. This book is her first, but not her last, in a new series entitled Vampyre Kisses.
1 Vote

Faith is completely and utterly bored with her life. It is the same thing every day. Wake up, go to work, eat dinner, and then go to bed. She thinks that she is pretty satisfied with her life, but deep down she wants more. Then Trent becomes part of her life. Mysterious and charming, he is a vampire from Ireland. Trent accidentally gets Faith involved with his vampire problems and she gets caught in the chase to find stolen vampire and werewolf gems. Faith learns that she is a witch - the very last of her kind.