The Unheard: A Memoir of Deafness and Africa 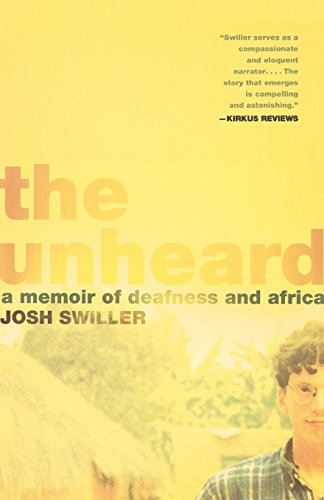 The Unheard: A Memoir of Deafness and Africa
Josh Swiller
A young man's quest to reconcile his deafness in an unforgiving world leads to a remarkable sojourn in a remote African village that pulsates with beauty and violence These are hearing aids. They take the sounds of the world and amplify them." Josh Swiller recited this speech to himself on the day he arrived in Mununga, a dusty village on the shores of Lake Mweru. Deaf since a young age, Swiller spent his formative years in frustrated limbo on the sidelines of the hearing world, encouraged by his family to use lipreading and the strident approximations of hearing aids to blend in. It didn't work. So he decided to ditch the well-trodden path after college, setting out to find a place so far removed that his deafness would become irrelevant.That place turned out to be Zambia, where Swiller worked as a Peace Corps volunteer for two years. There he would encounter a world where violence, disease, and poverty were the mundane facts of life. But despite the culture shock, Swiller finally commanded attention―everyone always listened carefully to the white man, even if they didn't always follow his instruction. Spending his days working in the health clinic with Augustine Jere, a chubby, world-weary chess aficionado and a steadfast friend, Swiller had finally found, he believed, a place where his deafness didn't interfere, a place he could call home. Until, that is, a nightmarish incident blasted away his newfound convictions.At once a poignant account of friendship through adversity, a hilarious comedy of errors, and a gripping narrative of escalating violence, The Unheard is an unforgettable story from a noteworthy new talent.
1 Vote

Tweet
The Unheard: A Memoir of Deafness and Africa review by KFlo

This book follows the journey of Jeff Swiller as a Peace Corp volunteer in the village of Mununga in Zambia. Swiller is legally deaf and has learned to use hearing aids. But this puts him in a difficult situation- he doesn't fit in with the hearing community, nor with the deaf community. When Swiller goes to Mununga, he believes that this is finally a place where his hearing ability doesn't matter. But Mununga also has the harsh realities of life. Swiller witnesses sickness, death, disease, a mob, and a violent bus crash. He finds good friends, but also makes some enemies.