Under The Persimmon Tree 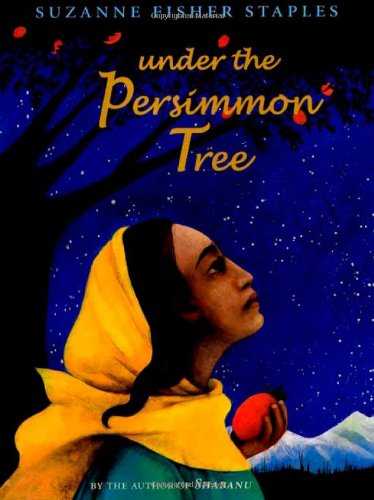 Under The Persimmon Tree
Suzanne Fisher Staples
Intertwined portraits of courage and hope in Afghanistan and Pakistan Najmah, a young Afghan girl whose name means “star,” suddenly finds herself alone when her father and older brother are conscripted by the Taliban and her mother and newborn brother are killed in an air raid. An American woman, Elaine, whose Islamic name is Nusrat, is also on her own. She waits out the war in Peshawar, Pakistan, teaching refugee children under the persimmon tree in her garden while her Afghan doctor husband runs a clinic in Mazar-i-Sharif, Afghanistan.Najmah’s father had always assured her that the stars would take care of her, just as Nusrat’s husband had promised that they would tell Nusrat where he was and that he was safe. As the two look to the skies for answers, their fates entwine. Najmah, seeking refuge and hoping to find her father and brother, begins the perilous journey through the mountains to cross the border into Pakistan. And Nusrat’s persimmon-tree school awaits Najmah’s arrival. Together, they both seek their way home.Known for her award-winning fiction set in South Asia, Suzanne Fisher Staples revisits that part of the world in this beautifully written, heartrending novel. Under the Persimmon Tree is a 2006 Bank Street - Best Children's Book of the Year.
1 Vote

The year is 2001. Afghanistan is in the middle of a war between the Taliban and the US- backed Northern Alliance. The story follows two extraordinary people: Najmah and Nusrat. Najmah, whose name means "star," has lost almost all of her family to the fighting. Her only remaining relative is an uncle, whose sole aim is to steal the land that her father wanted her so much to protect. Najmah has no choice, but to accompany a family of travelers, as they are the only people, it seems, that care about her.