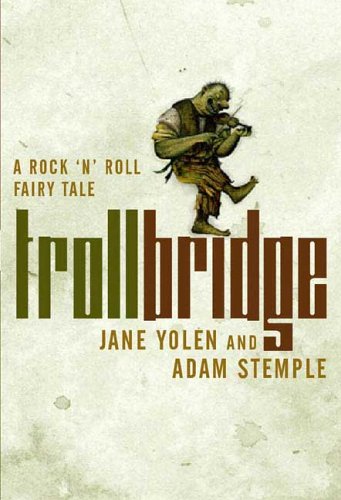 Trollbridge
Adam Stemple, Jane Yolen
A wicked adventure--or deadly…trollbleFor sixteen-year-old harpist prodigy Moira, the annual Dairy Princess event in Vanderby is just another lame publicity "op." Moira a dairy princess? Get real. Twelve girls have been selected to have their likeness carved in butter and displayed on the Trollholm Bridge. It's a Vanderby State Fair tradition that has been going on for, like, ever.As far as Moira is concerned, the sooner it's over with the butter--er--better. About the same time and not far away, three brothers--members of the sensationally popular teen boy band The Griffsons--are in the middle of a much needed road trip to relax from the pressures of their latest tour. In a flash, however, the kids are suddenly transported to a strange and mystical wilderness where they find themselves in the middle of a deadly tug-of-war struggle between a magical fox named Fossegrim and the monstrous troll Aenmarr of Austraegir. At the heart of the feud is a battle for possession of a mysterious magical fiddle--and an ancient compact between Trollholm and the outer world.Whatever. All Moira cares about is that eleven of her fellow princesses have been enchanted into a slumber and Moira needs to figure out a way to awaken them…and get home.Unfortunately for Moira and the Griffsons, nothing in Trollholm is as it seems. Finding a way out of Trollholm may be a lot more difficult than they think.
1 Vote

Trollbridge is about a girl, sixteen-year-old Moira, who happens to be a harp prodigy. Pretty and strong-minded, Moira is selected to be one of twelve Dairy Princesses. Every year, the Dairy Princesses travel to Trollholm Bridge to get their pictures taken so that they can have their likenesses carved in butter and displayed on Trollholm Bridge. However, this year, disaster strikes: all of the Dairy Princesses -- except for Moira -- are taken by Aenmarr the Troll in the middle of the photo shoot. Now it is up to Moira to save the girls from the trolls.