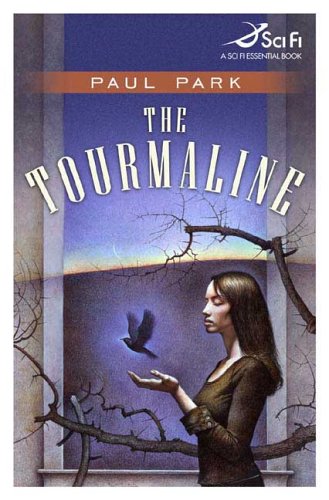 The Tourmaline
Paul Park
The sequel to Park's stunning fantasy debut, A Princess of Roumania.Teenager Miranda Popescu is at the fulcrum of a deadly political and diplomatic battle between conjurers in an alternate fantasy world where "Roumania" is a leading European power. Miranda was hidden by her aunt in our world. An American couple adopted and raised her in their quiet Massachusetts college town, but she had been translated by magic back to her own world, and is at large, five years in the future.The mad Baroness Ceaucescu in Bucharest, and the sinister alchemist, the Elector of Ratisbon, who holds her true mother prisoner in Germany are her enemies. This is the story of how Miranda -- separated from her two best friends, Peter and Andromeda who have been left behind in the forests of an alternate America -- begins to grow into her own personality. And how Peter and Andromeda are shockingly changed in the process of making their way to Roumania to find Miranda again at the end of this book.
1 Vote

The Tourmaline is the continuation of the story that began with Paul Park's A Princess Of Roumania. In this novel, several characters from our world have been transported to an alternate world. It turns out that Miranda is really not from the familiar world that Peter, who is the first character we meet in this book, was born in. Miranda was, in fact, only sent for her own protection as a baby. Now she's back in this magical world, to save Roumania (or Romania) which is, in this reality, a world power.