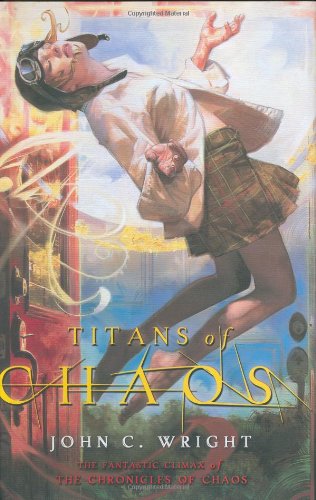 Titans of Chaos
John C. Wright
Titans of Chaos completes John Wright's The Chronicles of Chaos. Launched in Orphans of Chaos--a Nebula Award Nominee for best novel in 2006, and a Locus Year's Best Novel pick for 2005--and continued in Fugitives of Chaos, the trilogy is about five orphans raised in a strict British boarding school who discovered that they are not human. The students have been kidnapped, robbed of their powers, and raised in ignorance by super-beings. The five have made incredible discoveries about themselves. Amelia is apparently a fourth-dimensional being; Victor is a synthetic man who can control the molecular arrangement of matter; Vanity can find secret passageways through solid walls; Colin is a psychic; Quentin is a warlock. Each power comes from a different paradigm or view of the universe. They have learned to control their strange abilities and have escaped into our world: now their true battle for survival begins. The Chronicles of Chaos is si
2 Votes

Titans of Chaos revolves around the story of five orphans, Amanda, Colin, Vanity, Quentin and Victor who are running away from their parents mythological deities. Each orphan has a unique power which they have to use to save the universe.

What's this?
Titans of Chaos review by RTho

Titans of Chaos begins in the midst of a problem. Five orphans, who are actually Titans of Chaos in human form, are dsperately using ther supernatural powers to stop several monsters and fellow Titans from hurting them; and destroying the universe. The five orphans (Amelia, Victor, Vanity, Quentin, and Colin) go through many hardships, varying from broken relationships to being attacked by a crazed god of the Underworld. At the end, the final battle is fought, almost lost three times in succession, and then finally won for good, though the orphans are badly wounded.